The Story in Canada East by Jeremy Podlog - CrossFit Journal

Camille Leblanc-Bazinet and Michele Letendre rekindled their rivalry, and Letendre found herself on the edge of qualifying for the CrossFit Games again amid ever-growing competition.

Kristine Andali gave Letendre a run for her money as only 1 point separated the women going into the final event of the three-day weekend. In the end, Letendre completed 64 pull-ups first and strung together eight 135-lb. overhead squats quicker than Andali. Letendre took second in the event and Andali took eighth, giving the former second overall with a 5-point cushion. Still, Andali was happy with her performance.

“I’m very proud of myself. Likewise I said before, I’m going up against two of the best women in the world,” she said.

“I feel so good. I don’t know, beyond words. I fought so hard this weekend. … I feel so happy and proud for the effort I put in. It’s a sweet victory for me.”

On the men’s side, Albert-Dominic Larouche was hoping to remain the Canada East Regional champ. While he distanced himself from the pack early, three athletes were within 3 points of each other for the second spot at the Games.

In the end, it was a three-way tie at 56 points, with Paul Tremblay getting the nod due to two event wins. 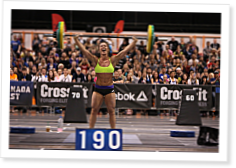 The Story in Central East

USA vs The World: Decisions That Made the Difference

Although it shared its weekend with four other events, the Central East Regional was the show-stopper. The competitors’ names alone were enough to pique the interest of even the casual CrossFit… Continue Reading

On Saturday, Oct. 26, Team World entered the CrossFit Invitational in Berlin as the underdog, but the group pulled off an upset that surprised everyone—except its members.

Danielle Sidell: “I Want it More Than Ever”

In the 2012 Open, Ashley Carriveau won the Northern California Region. That same year she was diagnosed with cervical cancer.

During her collegiate track-and-field career, Danielle Sidell wanted to be thin.