The Story in North Central by Michael Dalton - CrossFit Journal

After Day 1, Games veteran Alex Nettey sat atop the Leaderboard in a spot many had reserved for Kyle Kasperbauer, who finished third at the CrossFit Games in 2012. On their heels was rookie Jacob Heppner.

“I’d like to make it, but I’m not gonna place money on myself,” Heppner said with a smile at the end of Day 1.

On the women’s side, 2012 and 2013 regional winner Elisabeth Akinwale found herself in unfamiliar territory, placing outside the top three in Events 3 and 4.

“I’ve just never had that experience in the regional setting. Sure, in the Games. So it sucks. … It was a little detracting,” Akinwale said.

Five-time Games athlete Stacie Tovar was also in unchartered waters. She finished ninth in Event 1 and 23rd in Event 2. On Day 2, she finished Event 5 in 10th.

“I felt like a wet noodle out there,” she said as she cried during an interview.

But Day 3 saw Tovar smiling as she worked through Event 6. She won the event.

“You know what, shit happens. Shit didn’t go my way. Stuff didn’t go (as) planned. I’m a fighter,” she said.

Tovar added: “I love what I do. It’s supposed to be fun. If you’re not smiling, you’re not having fun, right?”

“My abilities are not the same as like Akinwale’s or Tovar’s. They’re at a totally different level, so I don’t try to really keep pace with anyone,” she said at the end of Day 1.

She added: “I would be terrified to qualify for the Games.” 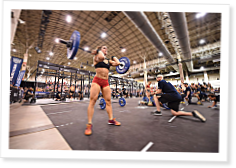 The third prep WOD is done as a five-person team, with one man going… Continue Reading

In 2014, the only competitors going to the CrossFit Games are those who qualify at regionals—no special invitations, no past-champ rule, no wild cards.

In the Central East Region, that means… Continue Reading