By Jeremy Podlog and Kyle Kleefeld

British Army veteran Mike Burgess dedicated himself to becoming fit. The 42-year-old lives with post-traumatic stress disorder but says he doesn’t let it define who he is. Drawn to CrossFit by its connection to the military, Burgess was intrigued when he saw the results CrossFit produces. In this six-part series, follow the trials and triumphs that go along with “Building Burgess.”

In Part 4, we find Burgess in his home, tired after a restless night of sleep.

“I had an awful night,” he says. “Sometimes it happens. No real big trigger. Just nightmares. I’ve got these techniques for grounding myself, looking after myself.”

Years after leaving the military, Burgess is still affected by his PTSD, sometimes at unexpected times and in unexpected ways. His medication can make it hard to do CrossFit, let alone carry grocery bags.

“I try not to let it dwell on me, ’cause I just think, you know, it’s not the end of the world. This is a marathon rather than a sprint,” he says. “But it’s still just one more thing that kicks you when you’re down—when you can’t do something that makes you feel good.”

He’s now starting to notice clothes fit him differently, and seeing himself in old photos makes him realize he’s lost a significant amount of weight.

“So far, it’s a really positive experience,” he says of his time at CrossFit Calgary.

Burgess notices his mind and body getting healthier every day.

“Overall, (CrossFit’s) making me feel a lot better,” he says. 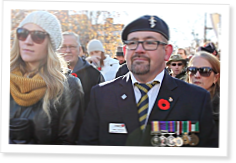 Jian Jackson: A Will and a Way

Jian Jackson was born healthy. At about 5 months old, she had a high fever at the orphanage where she lived in China. Four days later, she wasn’t moving her legs anymore.

“By then… Continue Reading

First it was an archery range, then it was a shooting range. Today, it’s a CrossFit affiliate. But before all that, CrossFit Forward was housed in Lindsay Williams’ home.