Every gym has the occasional body-odor problem. Three CrossFit coaches share their strategies for dealing with a smelly athlete. Emily Beers reports.

Although it was years ago, Andrew Swartz still gags when he thinks about the stench.

“His body odor was different than anything I’d experienced. It didn’t seem to be restricted by the laws of physics as we know them,” the longtime CrossFit coach said of a client he used to train.

Swartz added: “The gag radius was really, really big, but where this guy stood out was that there was a battery-licking quality to his smell. And it seemed his body was impervious to deodorant. He showered regularly, and no matter how much pit stick he put on, it would surrender after about 20 minutes—an hour if he sat perfectly still.”

It seemed there was no solution, and other clients started to complain. The only thing Swartz could think of to do was to take his client outside to work out to avoid disrupting those breathing hard in the gym.

It was an extreme measure, and Swartz knew it, but he didn’t know what else to do. There was no policy in place for handling a smelly client at the time.

Although it might sound absurd to adopt an official policy for clients who might not shower enough or who own just one workout T-shirt, any coach who has had to deal with such a situation understands the need for a carefully thought-out plan for addressing body odor. 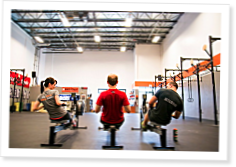 Serving a Community in Crisis

Generally, Olympic weightlifting is thought of as an individual sport… Continue Reading

Welcome to the Fold

Referrals are key to a running a successful box, and many affiliate owners have found organic ways to generate and bring new faces into the gym.

One of the founding tenets of CrossFit… Continue Reading

Affiliates have many options for integrating new members. Emily Beers talks to five gym owners who explain what they do and why.

A sign won't help. Bringing it up in conversation won't either. You have to tell the person to his face, it's the only way, it's the truth. If you lose him... you lose him. If he really wants to come back, he'll find his way back.