3:18 James Hobart talked about his training since finishing second at the North East Regional and described how he’ll prepare in the final weeks before the CrossFit Games. Hobart, who was on the CrossFit New England team that won the Affiliate Cup in 2011, spoke about why he decided to compete as an individual in 2014, and he discussed how his fitness has evolved over the years. Moving “upstairs,” Hobart highlighted the importance of self-talk and described how he constantly works on his mental game. The 28-year-old had the privilege of training with three-time Games champ Rich Froning throughout the year, and Hobart gave his thoughts on what it might take to earn a spot on the podium Froning has owned since 2011. 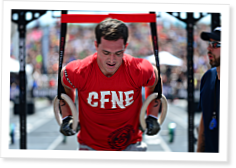