Rich Froning overcomes all adversity and pressure to stand atop the CrossFit Games podium for the fourth consecutive year.

It was seconds before Sunday’s Midline March at the 2014 Reebok CrossFit Games—the first individual event of the final day. Three-time champ Rich Froning awaited the buzzer.

Between these athletes and the finish line were 3 rounds of 25 GHD sit-ups, a 50-foot handstand walk and 50 feet of walking overhead lunges with 155 lb. In quintessential fashion, Froning surpassed his competitors on the second round of lunges. After winning the heat and the event, he went on to encourage nearly every competitor who remained on the field, one by one, until each man crossed the finish line.

That was followed by a short on-camera interview. Then he made his way toward the tunnel beneath the stands only to be stopped by incessant fans seeking autographs and pictures.

“Rich! Rich! Rich!” seemed to come from every direction. Fans shoved in his face a postcard-sized advertisement, a trucker hat—one threw a pair of sunglasses down from seats too high to make a hand-off—and smartphones.

Such is the life of the man who—with struggle—would later that day become the fittest man on Earth for an unprecedented fourth consecutive year. 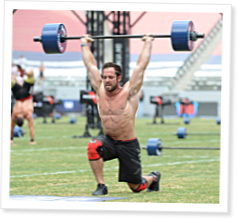 Chris Spealler has yet to decide if he will try to qualify for next year’s CrossFit Games. Time, he said, is what’s holding him back. His wife, meanwhile, wants him to compete… Continue Reading

Spencer Hendel snagged third place at the North East Regional on the final workout of the weekend. At 23, he’ll make his fourth appearance at the CrossFit Games this year… Continue Reading