2:42 Rob Davis, a longtime affiliate owner, shared his thoughts on programming and how he determines if it’s effective. Davis detailed the way he tracks results and the benefits of discussing those results with his athletes, and he explained how programming affects the culture of an affiliate.

16:08 Jason Khalipa described his experience at this year’s CrossFit Games and explained why 2014 is likely his last year competing as an individual. He spoke about the mental aspects of the Games and how his experience helped him on the final day of competition this year. He talked about what’s next for him, including the first CrossFit Team Series and the possibility of competing on NorCal CrossFit’s affiliate team in the future. Finally, Khalipa shared some business advice with other affiliate owners. 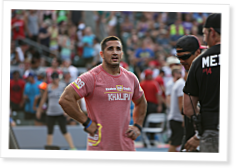