While some Brazilian jiu-jitsu athletes don’t see the link between CrossFit and martial arts, others say general physical preparedness can help athletes win on the mat.

Garth Taylor started doing Brazilian jiu-jitsu in 1994, and by 1998 he was winning national-level championships. But Taylor wanted more. What he really wanted was a world title. Taylor’s coach, Claudio Franca, told him if he wanted to win a world championship, he didn’t need more time on the mat. He needed to be a better athlete.

Franca knew just the person who could help. He had been working with a personal trainer at Spa Fitness in Santa Cruz, California, who was combining Olympic weightlifting, gymnastics and high-intensity training and producing impressive results. The trainer’s name was Greg Glassman, and he was teaching CrossFit.

The next year, in 1999, Taylor competed in Brazil and became a world champion as a purple belt. It was his first of three world titles.

Not everyone is so sure CrossFit is an asset on the mat.

“The CrossFit people need to get the fuck out of there (the gym) and get on the mat, and do some real competition … the CrossFit guys, believe me, they would have to pay their dues. It would take them a long time to adapt to jiu-jitsu or wrestling,” said Steve Maxwell on the April 28, 2014 episode of “The Joe Rogan Experience” podcast. Maxwell is a fitness coach and Brazilian jiu-jitsu instructor.

“Work is very specific to the particular sport. A high-level swimmer is going to be exhausted in minutes on the mat … there’s no substitute for doing the actual activity,” Maxwell said.

No serious jiu-jitsu athlete would completely replace jiu-jitsu training with CrossFit. But CrossFit isn’t supposed to replace time on the mat, or any sport-specific training for that matter. CrossFit gives athletes general physical preparedness, and several top martial artists say gains through CrossFit transfer particularly well to Brazilian jiu-jitsu, crediting CrossFit training with helping them win at the national and world level. 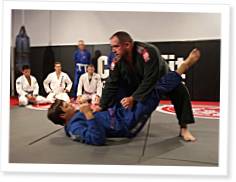 “The resistance band is not going to develop the power, but what… Continue Reading

When it comes to a successful punch, power is of the essence.

By John Hackleman, with Greg Amundson and Shain Howard

Swimming in the CrossFit Sea

Pitmaster John Hackleman offers ideas on how athletes and trainers can measure the quality and quantity of martial-arts fitness training.

You can read a book about the sea. You can look at a video about the sea. But if you never take the real plunge you don’t know what the sea is actually like… Continue Reading

That´s is True!
I`m live in Brazil and I do BJJ , and after CF, My Training change.
I can see and copare with another guys that don´ t do CF .