Pulling for all You&#8217;re Worth by Bill Starr - CrossFit Journal

In the CrossFit Journal article “The Arms Race and Olympic Lifting,” I stated I didn’t think Olympic lifters should do specific work on their biceps. I noted that these athletes get plenty of work for their biceps through all the heavy pulling they do regularly: power cleans, power snatches, full cleans and snatches, snatch and clean high pulls, and heavy shrugs. Those heavy pulling movements will strengthen the prime movers of the upper arms, the brachioradialis and brachialis.

Furthermore, when Olympic lifters do any type of curls, it causes the muscles to peak, and that prevents them from being able to rack cleans correctly.

However, one exercise works the biceps very directly yet does not interfere with racking a clean. This is because it does not build bulging biceps rather but strong, elongated muscles. It’s a basic exercise that has been a part of strength training since Milo lifted that calf: pull-ups.

Bodybuilders have always used pull-ups to develop a wide wing spread in their upper backs, and many strength athletes include chins in their routines to help them enhance their pulls. Chins hit the lats like no other exercise.

Done correctly, pull-ups can strengthen your entire upper body: arms, shoulders, chest and upper back. They are the perfect exercise for anyone who wants stronger biceps but does not want the development to have a negative influence on the rack position for a clean or reduce flexibility in the upper arms. 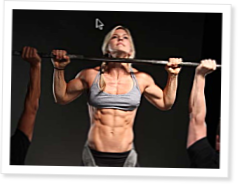 Do women require a different approach to strength training? Bill Starr doesn’t think so but offers a few tips for coaching female lifters.

I realize the origin of the… Continue Reading