A homeless high-school dropout with a felony charge and a son, Damian Relierford now has a football scholarship and wants to help kids like him. Andréa Maria Cecil reports.

The tattoo on his forehead reads “Damebo.” It’s his nickname. He got it when he was high.

It’s a reminder of his missteps, but also of how far he’s come.

Damian Relierford dropped out of high school, had a child by the time he was 19 and twice went to jail—the first time for fraud, the second for throwing an empty beer can at his son’s mother. All along, one thing never wavered: his passion for football.

Relierford had shown talent for the sport early in life. And it was no surprise. His uncle is Fresno State wide receiver Josh Harper, whom the Tallahassee Quarterback Club Foundation named to the 2014 Biletnikoff Award preseason watch list in mid-July. Another uncle, Matt Harper, is assistant special-teams coach for the Philadelphia Eagles. And his grandfather is Willie Harper, outside linebacker for the San Francisco 49ers from 1973 to 1983 and a 1972 All-American at the University of Nebraska.

When Relierford found himself in jail for the second time—at 20—he started having some realizations. Looking back on his short life of transgressions, he began thinking about what could have been.

In the moment, he thought, “I did all that to myself. If I want to give my son a better opportunity than I had, I need to get myself together.” 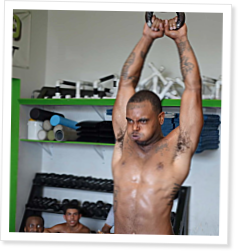 Managing stress, anxiety and fear is part of being an elite athlete. Andréa Maria Cecil talks to CrossFit Games competitors and coaches who share their approaches to fighting inner battles.

You have two choices… Continue Reading

Spencer Hendel snagged third place at the North East Regional on the final workout of the weekend. At 23, he’ll make his fourth appearance at the CrossFit Games this year… Continue Reading

Good luck, young sir. Lots of people in the CF Community rooting for you.