Are athletes made by playing or training?

At the 2014 NHL Scouting Combine, Sam Bennett couldn’t do a pull-up. The 17-year-old faced criticism from various media outlets, but none were able to say why he should be able to do a pull-up. Without an objectively measurable scale of “fitness”—or even a definition—writers knew something was wrong with a potential No. 1 draft pick who couldn’t do a single pull-up, but they couldn’t say what, exactly.

“For every kid like this, there’s a waiting line of kids who don’t make it and still can’t do a pull-up,” said Jeff Martin, co-founder of CrossFit Kids.

Seventy percent of kids drop out of their primary sport before they’re 13. Most of those say their sport should be more fun. Decades of research and practice paint a very clear picture: Early specialization in one sport is a bad idea.

So why are kids playing hockey in the summer instead of doing pull-ups? 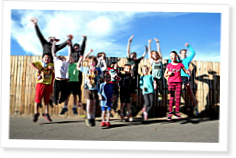 The Secrets of Sticking With It

Chris Cooper started with a scientific experiment about “fitness adherence.” It ended as another CrossFit success story: The secrets of sticking with it.

This is the story of how you get… Continue Reading

“So when I found CrossFit, it was the perfect fit,” says CrossFit Radio host Justin Judkins, who is also the coach of the Maple Mountain Golden Eagles high-school wrestling team. “It brought to… Continue Reading

In the late ’50s and ’60s, future Olympic legends Mark Spitz and Debbie Meyer were knifing through the pool at the Arden Hills Swim Club. In total, Arden his has produced 31… Continue Reading

First off, this article should have way more comments.

Secondly, good stuff. I love the point about doing more multi-joint work (gpp) in the weight room instead of just sport specific stuff. Then once the athlete builds a solid enough foundation, then begin to incorporate the sport specific exercises.

Couple things I have comments on - not exactly disagree completely, but a different perspective.

1) I agree that kids should not specialize at a young age. In fact, I like kids playing as many sports as possible. However, I think it's not a bad idea to pick a primary sport to focus on - as long as it's not forced. For example, basketball was (and deep-down really still is) my life. But I still played football and ran track in high school. And naturally, playing quarterback helped my decision-making as a point guard and also helped me get used to contact. (Track was more just running in meets - my training was CrossFit.com workouts haha). While I enjoyed both sports a lot, I always kept basketball in the back of my mind and managed to find time to practice every day. There is no substitute for shooting a basketball - a point that Brian Hassler (who comments here sometimes) helped me understand.

So playing on a team and games year round? Depends, but probably not. But keeping the skills of your primary sport fresh year-round? Definitely a must - and something the article probably agrees with.

2) I don't mind the go-out-for-pizza-if-you-win-the-game reward. Especially over the individual reward "we lost but I played great."

3) Ahhh, the old car ride home. Again, I disagree. Yeah, it sucked at the time but my pops drilling into me like that kept me level-headed. I needed that stuff.

Through the article, I think two things need to be in perspective. First, the kid's desire to play said sport. If the kid doesn't want to play, then disregard all the above. Second (and most important) is the athlete's genetic potential. Regarding the study about top tier athletes specializing two year later, do you think the conclusion is true because they built a "broad athletic base" or because they were freaks to begin with and could get away with a late start? My guess is the Russel Westbrooks and LeBrons and Randy Mosses of the world reached the top tier because of their genetic potential - along with a good work ethic. And the mid-level through low-level professionals are either people who are equally as talented but don't work hard, or people who are decently talented and practice every single day of their lives.

Aside from the minor details, I thoroughly agree with the purpose of the article. Good work as usual.