Make Your Own Luck by Hilary Achauer - CrossFit Journal

Make Your Own Luck

Three cups of coffee, six hours of coaching, four hours on the computer and one-life changing encounter: a day in the life of affiliate owner Mark Lin.

Mark Lin was not happy to be in AutoZone.

“After the DMV and a country-music concert, AutoZone is my least-favorite place,” Lin said. He just wanted to get into the parts store, buy the battery for his mini-motorcycle—which he uses to chase the members of his gym when he suspects they are sandbagging the 400-m run—and get out.

Lin’s days are long. The owner of CrossFit 858 in San Diego, California, Lin has been running his affiliate since 2011, and although he employs five other coaches, he’s in charge of the gym’s programming, accounting, marketing, social media, legal issues, vendor management and membership. He also coaches two or three classes and acts as assistant coach for a few more throughout the day.

On that day in May, a trip to AutoZone was one of the things on Lin’s massive to-do list. What Lin didn’t know was that the irritating errand would lead to a chance encounter with one of the AutoZone employees—and the interaction would change both lives.

A close look at a day in the life of an affiliate owner is a window into the appeal—and the challenge—of the job. Like most business owners, Lin works long hours and wears many hats.

Unlike many business owners, Lin is a witness to life-changing moments, to people discovering a strength they never knew they had, to a community coming together in service. 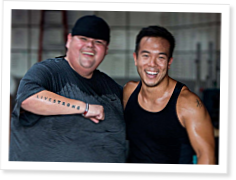 Tacheena Rubio drives a long way to work out. There are… Continue Reading

It’s a good idea to know how to clean up a blood spill in the box.

In October 2012, Donnie Savella suffered an injury that eventually led to paralysis of his legs. He set a goal to get back into competitive shape by 2015. This year, he competed in the… Continue Reading

Proud of you Mark! Such a great community and gym you have built. Best of luck