Steve’s Club: Bringing out the Best

Steve’s Club is a nonprofit organization that reaches out to at-risk youth through fitness—specifically CrossFit—says founder Steve Liberati.

“It’s about leadership activities to help the kids, to bring out the best in the kids, and to give them the traits and qualities they need to become leaders,” says Liberati.

“Being part of the Steve’s Club Leadership Camp, ... it really just goes back to my childhood, growing up and kind of where I am now,” Malleolo says of participating in the camp. “I wasn’t the model child … and what Steve’s done with these kids has created an opportunity for them to feel cared about.”

Camp participant Genesis, who joined Steve’s Club to spend more time with her boyfriend, says she may have dropped out of school had it not been for the program.

“I’ve grown up into a life where I’ve always been considered a mistake,” she explains. “I was gonna drop out (of) high school, and because of Steve’s Club, continuing with that, I didn’t drop out. Steve told me to keep going.”

Another camp participant, Ruben, says doing CrossFit has helped him adjust to life in the United States since moving from Mexico.

“CrossFit and fitness is very important,” he says. “And it kind of brings out the best in you.” 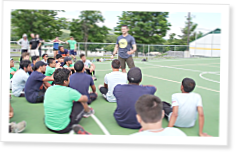 Glassman on D.C. Licensure: “They Want to Control You”

Zach Forrest: “CrossFit Is My Future”

In late July, CrossFit Founder and CEO Greg Glassman traveled to Washington, D.C., to discuss licensure regulations for personal trainers in the District. He met with city-council representatives and others… Continue Reading

Zach Forrest, owner of CrossFit Max Effort, welcomes up to 60 visitors to his affiliate each day. The 16,000-square-foot facility in Las Vegas, Nevada, is home to a community that welcomes everyone… Continue Reading

The Story in Asia

CrossFit feels slightly different in Asia, according to Adrian Bozman.

“The spirit here is ridiculous. People are just so fired up,” said Bozman, head judge at the Asia Regional in Korea… Continue Reading

2 Comments on “Steve’s Club: Bringing out the Best ”

Sweet video Steve. We train a majority of teens too and I always keep you guys and Brand X in the back of my mind as motivation to keep working hard to give them the best learning environment. I want to match what you guys provide.

Keep up your good work.

Steve you have a great crew showing these kids the right path. Thanks for your hard work.