The heat of the midsummer sun made the Triple 3—3-km row, 300 double-unders, 3-mile run—much tougher than it should have been. Needless to say, men were shirtless for the most part, while women wore little more than booty shorts and a sports bra. Except one.

Marlene Andersson, an expat Swede who was Asia’s female representative at the Games, remained modestly covered, wearing a T-shirt and capri tights underneath shorts.

It’s not that she wasn’t hot; she was. But representing Kuwait—a country that borders Saudi Arabia and Iraq and has a population of 3.3 million—comes with responsibilities the other 41 female competitors didn’t have to deal with. One of these responsibilities was to be mindful of how wardrobe choices might be perceived by the many Kuwaitis watching back home.

Andersson explained the minimalist apparel of her peers isn’t seen as acceptable in Kuwaiti culture, and the last thing she would want to do is offend people in a country that took her in with open arms.

“They have their views about what’s decent or not,” Andersson said. “What I try to do is at least live a little bit by their rules, so I don’t want to act as if I’m a foreigner. I am living in their country, and I want to be respectful of the rules.” 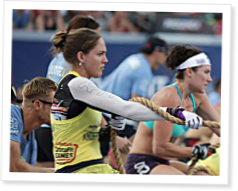 “Are you OK? Is there anything we can… Continue Reading