Coach, Counselor or Both? by Brittney Saline - CrossFit Journal

Coach, Counselor or Both?

It was a rare warm November evening in Fort Wayne, Indiana, when Maureen Randall quit the workout.

Beats were dropping from the speakers at CrossFit Praus, but for once, the self-described class jokester wasn’t dancing. The date marked 22 years since the night she was raped. She had been just 14 years old. Usually, she spent the anniversary locked indoors. Tonight, she tried to do an overhead squat, but the bar crashed to the floor.

“I broke,” Randall recalled. After the clock had gone dark, Randall still sat, her head buried in her hands. Affiliate owner Amanda Burge had a choice: Walk away or dive in. She dove.

The conversation was the beginning of a mentorship between coach and athlete that extends beyond class to texts, phone calls and post-workout discussions about how Randall can use CrossFit to help overcome her past.

“Anytime I need her, she’s there—no questions asked,” Randall said. “A lot of people coach and then they leave. With Amanda, that’s not how it is.”

As athletes struggle with everything from poor mobility to poor self-image, coaches are faced daily with the challenge of walking the line between coach and counselor. For Burge, it’s a no-brainer. 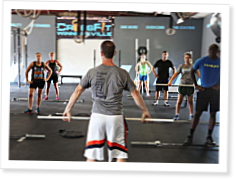 The rope climb in the last event of the 2010 CrossFit Games derailed some top competitors who didn’t have the technique to scale it efficiently. Some had spent plenty of time on the… Continue Reading

This is the first part of Episode 3 of the Boz and Todd Experience. This session took place at Black and Gold CrossFit in West Point, NY on April 25th and 26th, 2009.

2 Comments on “Coach, Counselor or Both?”

When someone does not have nobody to help them to reach their goals its matter of time they drop emotionally, and thats the big part of a coach, seeing that you have someone who supports you and help you reaching your/s goal/s can make the world difference.

By goals i don't mean small goals, i mean big goals, that mean a lot for the "athlete".

Well said Rodri! Our Head Coach/Owner recently wrote a great article on goal setting. The article inspired me to set some goals for the current Open as well as for the entire year.

I highly recommend the article.....

http://crossfitdogfight.com/
-click on WOD (at top of page)
-then click "uncategorized" on right side of page under Categories
-article is Mind WOD 2.17.2015 "Goals and Crossfit"

Enjoy the read. Good luck to you and all in reaching your goals.