With the encouragement of co-worker and CrossFit coach Meredith Davis, 18 Cannon School educators in Concord, North Carolina, started training at CrossFit Vitality. In this nine-part series, these teachers and administrators go through CrossFit fundamentals and try to determine the cognitive impact of the program.

In Part 6, we take a trip back in time to the 2013 Reebok CrossFit Games Open and the live announcement of Open Workout 13.1. CrossFit Vitality hosted the event, and soon after, Davis ran into CrossFit Founder and CEO Greg Glassman at a local Starbucks. Suddenly, a dream became a reality.

“I could just go on and on about how awesome (CrossFit) is, and how, as an educator, it would be amazing if kids could actually have this exposure, because it changed my life,” says a teary Davis.

Hearing her story, Glassman offered to fly her to California and send her to schools that embrace CrossFit in their curriculum. She was overjoyed.

“It was an amazing gesture that I won’t forget,” she says.

Back at Vitality, it’s time for a six-week diet challenge, and while some members are optimistic, others aren’t so sure.

“Some people are wavering,” says Michelle Zelaya, upper-school Spanish teacher. “But we’re trying to support each other.”

Time will tell who will remain committed and who will falter when it comes to diet. 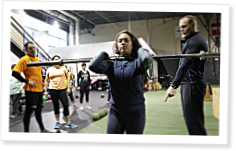 Fit to Teach Episode 8: Where Teachers Can Dream

Fit to Teach Episode 9: For the Kids

With the encouragement of co-worker and CrossFit coach Meredith Davis, 18 Cannon School educators in Concord, North Carolina, started training at CrossFit Vitality. In this nine-part series, these teachers and… Continue Reading

That's a sick story about running into Coach. The cool part about it is you made something out of it. I would probably be too starstruck to even say anything! Haha

Just curious about something, as far as the Paleo challenge, was it their option or was it Paleo for six weeks or else your out?

Hey!
Thanks for writing! No, it wasn't a "do the challenge or you're out" but it was a, "hey, if enough of you give this a shot we'll give you an extra month to train". So, many people that were able to stick it out gave it a shot and had GREAT results...but you'll have to keep watching to find out! :) It was great that they were able to join the rest of the gym for the challenge even though we had our own special little class.

Gotcha. Thanks for the clarification Meredith. I look forward to seeing how it goes.

You're welcome! I'm glad that you are enjoying the series. :)