The Death of Diversity by Chris Cooper - CrossFit Journal

Food is naturally diverse, and crops protect themselves from disease and predators through tiny genetic differences. When rice grassy stunt virus threatened to wipe out rice paddies from India to Indonesia in the 1970s, its advance was halted when a resistant strand of wild rice was found and crossbred with plants on the front line.

Modern strains of corn, wheat and fruit are bred for mass production. Top-producing crops are cloned and share the same strengths—and weaknesses—as their parents. As a result, they might be immune to some problems but more susceptible to others. When calamity strikes, entire harvests can be affected instead of just remote pockets of plants that share the same weaknesses. Ireland’s reliance on the Lumper variety of potato was a primary cause of the 1845 famine that led to a million deaths and 2 million displacements when potato blight ruined crops.

“Diversity is our protection as we face disease, whether you’re talking about corn or apples or cows or kids,” said John Bunker of FedCo Seeds. Bunker is known as “The Apple Guy” among farmers concerned with restoring crop diversity.

Our fields and orchards might produce more than they did a century ago, but many are more fragile. Whole varieties of fruit could be wiped out by a single unforeseeable problem. In the pursuit of plenty, is our table becoming less stable? 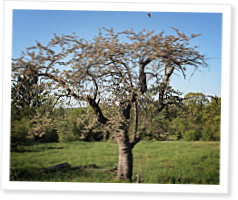 You can lead a man to water, but you can’t make him drink. Add sugar, salt, artificial flavors and a good story, and… Continue Reading