Randal D. Simmons was killed in the line of duty on Feb. 7, 2008. The 51-year-old was a 27-year veteran of the Los Angeles Police Department and a member of the SWAT team.

In addition to his service as an officer, Simmons often dedicated his free time to community outreach for at-risk and underprivileged youth.

“By the time that (Simmons) passed, he had mentored and ministered to over 1,000 kids,” says Simmons’ wife, Lisa.

The Randal D. Simmons Outreach Foundation was established in Simmons’ honor and aims to uphold his vision. The foundation serves to empower and encourage families and at-risk youth in underserved and low-income areas. The organization hosts fundraising events to raise money for the kids Simmons cared about.

“My dad, he was a hero,” Simmons’ son, Matthew, says. “He was basically the biggest role model anybody could follow.”

Even after his passing, Simmons remains an inspiration. LAPD and SWAT-team member George Ryan, who also leads the CrossFit Striking Trainer Course, described him as a “real-life superhero.”

Shortly after Simmons’ death, CrossFit dedicated a Hero workout to the fallen officer. Named Randy, the workout is 75 power snatches for time. Watch here as the community gathers to complete the workout, honor Simmons and maintain his legacy. 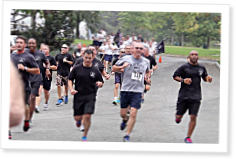 Steve Longan was worn out on working out, so he started running with the other guys at the Los Angeles County Sheriff’s Department Special Enforcement Bureau. But running wasn’t… Continue Reading

Tony Budding and Jimi Letchford of CrossFit HQ staff were invited to teach a group class at Practice CrossFit. Josh Bunch, the gym’s owner, described a number of… Continue Reading

Boz and Todd Do Olga

Top CrossFit HQ trainers Adrian Bozman and Todd Widman put in a lot of miles instructing at Level 1 and 2 certs, and they drink in the ideas and training philosophies they encounter… Continue Reading

This is Part 5 1/2 of the second episode of the Boz and Todd Experience. Boz and Todd, with special guest Chris Spealler, conducted four training sessions at Front Range CrossFit. Except… Continue Reading