It was well past 1 a.m., and darkness blanketed the city of Derry, Northern Ireland. The streets were barren save for two teenage boys and their paint. Neither boy noticed the car’s approach until four masked men erupted from within. The vehicle was unmarked.

“That’s when we realized we couldn’t really run,” Porter recalled.

The men were members of one of Northern Ireland’s paramilitary organizations, vigilante enforcers of order on the hunt for two gunmen in dark-colored sweatshirts. Presumably nationalist, they would settle for catching unionists defiling their territory with political graffiti.

Thankfully, Porter was just tagging the wall with his graffiti name, Easi. Because Porter’s art neither defaced any political murals nor posed political threat, the men left the “graffers” to their painting unscathed. It wasn’t the pair’s first encounter with masked men in the night, but it was “the scariest one we’ve had,” Porter said.

More than a decade after the end of The Troubles, the 30-year period of Irish civil unrest responsible for the deaths of more than 3,600 people and thousands more injuries, wounds still run deep in Northern Ireland. Bomb scares, shootings and threats of paramilitary violence are still commonplace between the western Cityside and eastern Waterside communities of Derry (officially Londonderry), a city divided by the River Foyle and social malaise.

“There’s a lot of fear,” said Porter, who attended Catholic school in his youth but describes himself today as an apolitical and non-religious free thinker. “People live in fear and they don’t realize it.” 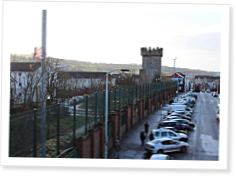 Where Everybody Knows Your Name

After home and work, there are “third places.” Eleanor Brown examines why we lost them and how CrossFit affiliates are bringing them back.

Shelter From the Storm

In July 2012, Stockton, Calif., became the largest U.S. city to file for federal bankruptcy protection under Chapter 9. The same year, it ranked 10th on a list of most dangerous cities in the… Continue Reading