Dr. Tamara Hew-Butler, a devoted marathon runner and sports-medicine podiatrist, was working in the medical tent at the 2000 Houston Marathon in Houston, Texas.

“It was hot that day,” Hew-Butler said, “and all these runners came (into the tent) and collapsed.”

Hew-Butler and her colleagues knew exactly what to do. Assuming dehydration, the medical aides started IVs for the collapsed runners. Then something strange happened. Instead of getting better, many of the runners got sicker. The medical workers continued to administer intravenous fluids.

“We were giving more IVs until four runners had seizures. They were taken to the hospital and were in comas for a week. They almost died,” Hew-Butler said.

The runners all suffered from exercise-associated hyponatremia (EAH). Hyponatremia occurs when sodium levels in the blood fall below 135 milliequivalents per liter (mEq/L; in international units, this is expressed as millimoles per liter, or mmol/L). A normal blood-sodium range is between 135 and 145 mEq/L. Hyponatremia can cause mild symptoms such as irritability and fatigue or more extreme symptoms including nausea, vomiting, seizures and comas. Brain swelling—exercise-associated hyponatremic encephalopathy (EAHE)—can cause death.

Most of the current hydration guidelines—including pre-hydration and drinking 8 oz. of fluids every 20 minutes while exercising—are not only unnecessary but can also be life-threatening for some people. In “Waterlogged: The Serious Problem of Overhydration in Endurance Sports,” Dr. Tim Noakes examined the problem in detail over 429 pages. He graphed over 1,600 cases of EAH and EAHE from 1981 to 2009, including a dozen fatalities. Noakes believes these conditions are entirely preventable. The solution: Athletes should drink only to thirst. But instead athletes followed hydration guidelines that either put them in the hospital or the grave.

On Feb. 20, 2015, CrossFit is hosting The 2015 CrossFit Conference on Exercise-Associated Hyponatremia, organized by the HEAT Institute. The world’s foremost researchers on hydration and hyponatremia will gather in Carlsbad, California, to set the record straight on hydration and hopefully save lives. 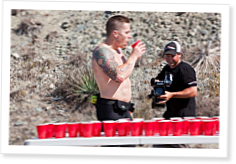 Jason Khalipa may not be working at his full capacity—and how scary is that?

The 2008 CrossFit Games champ clearly has the capacity to do a lot work very quickly, and he’s incredibly… Continue Reading