In 1998, Dr. Dale Benjamin Speedy stood in front of Ironman competitors in Auckland, New Zealand, and prepared to make an announcement he knew was going to be unpopular: He told the athletes he was reducing the number of hydration stations throughout the race, which was made up of a 2.4-mile swim, 112-mile bicycle ride and 26.2-mile run.

“People freaked out,” said Speedy, a sports- and exercise-medicine physician. The competitors couldn't figure out why he’d put them at risk of dehydration. Speedy, however, knew something the athletes and most medical professionals at the time did not: It was more dangerous for the competitors to drink too much water than too little. Speedy had seen it happen.

During the 1997 New Zealand Ironman, the number of cases of exercise-associated hyponatremia (EAH) almost triggered a state of emergency in the region. Athletes were in the hospital, some in comas. According to “Hyponatremia in Ultradistance Triathletes,” published by Speedy et al. in 1999 in Medicine and Science in Sports and Exercise, 58 of 330 race finishers studied were classified as hyponatremic. Eighteen of those sought medical care, and 11 were severely hyponatremic.

EAH occurs when blood-sodium levels become diluted and fall below 135 milliequivalents per liter (mEq/L). Hyponatremia can cause mild symptoms such as irritability and fatigue or more extreme symptoms including nausea, vomiting, seizures and comas. Brain swelling—exercise-associated hyponatremic encephalopathy (EAHE)—can cause death.

Of note, in 1996, the American College of Sports Medicine introduced the following hydration guidelines in the article “American College of Sports Medicine Position Stand. Exercise and Fluid Replacement”: “During exercise, athletes should start drinking early and at regular intervals in an attempt to consume fluids at a rate sufficient to replace all the water lost through sweating (i.e., body weight loss), or consume the maximal amount that can be tolerated.”

In 1998, Speedy implemented a simple prevention and education program, which included fewer aid stations and telling workers at those stations not to force liquids on the athletes. The result was a reduction in the percentage of race starters who received medical care for hyponatremia from 3.8 in 1997 to 0.6 in 1998.

On Feb. 20, 2015, scientists and doctors from around the world gathered at the Park Hyatt Aviara resort in Carlsbad, California, for the 2015 CrossFit Conference on Exercise-Associated Hyponatremia, organized by the HEAT Institute.

CrossFit Inc. sponsored the conference to share the latest research from top scientists in the field and spread the truth about hydration in hopes of preventing further death and injury. 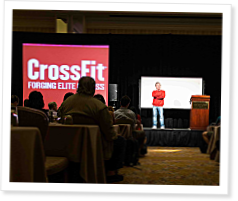 Consortium for Health and Military Performance and American College of Sports Medicine Consensus Paper on Extreme Conditioning Programs in Military Personnel: An Answer

CrossFit is based on measurable, observable and repeatable results, and extensive data support the safety, efficacy and efficiency of the CrossFit method. Criticisms of the program, however, are seldom… Continue Reading

It pains me to think of how some scientists put profit before truth and harmed so many people in a sport I love. And, they will probably never be held accountable.