“Now he’s head high, ‘I can squat, I can lift weights, I can hold my own,’” Aimee Lyons said of Carter Buce. Lyons owns CrossFit King of Prussia in Pennsylvania.

But the 17-year-old is not just physically improved. He’s also mentally improved. After participating in CrossFit King of Prussia’s SAT-prep program, Buce gained 250 points on his SATs to finish in the 98th percentile.

“He was able to … see that putting in the work pays off,” said Nate Rieder, Buce’s tutor who helped him prepare for the standardized test via two-hour sessions at the affiliate.

Initially, Buce—who had already scored in the 89th percentile on the SAT—had the mindset that he knew the material, only got a few questions wrong and couldn’t do much about it, Rieder indicated.

After working together, Rieder said Buce “began to see that with experience comes even better results.”

Buce was one of two teenagers who took part in CrossFit King of Prussia’s SAT-prep program, which emerged in 2012 at the encouragement of CrossFit Inc. Founder and CEO Greg Glassman. 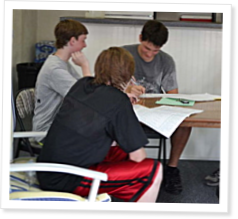