CrossFit coaches detail their successful and unsuccessful programming experiments in the search for measurable, observable and repeatable results.

CrossFit athletes are a skeptical bunch. They like to experiment and tinker and tweak. For Kurtis Bowler that meant messing around with strength-biased programming for his affiliate, Rainier CrossFit.

“Every year or year-and-a-half, there’s an influx of newer people,” said the owner of the 10-year-old gym in Washington state.

And with new people come new ideas—or old ideas made new again. Inevitably, they want to try other training methods besides the standard group programming to improve their fitness. Bowler is happy to oblige.

“I have found that the best way for them to learn that that stuff doesn’t work (in improving overall fitness) is for them to give it a go.”

So he steps aside, lets them have their moment and then encourages them “to look at the numbers.” At the end of the day, data always wins.

“I have found that we always come back to just programming CrossFit,” said Bowler, who is on CrossFit’s Level 1 Seminar Staff.

Many affiliates have fiddled with programming over the years. Sometimes coaches initiated the change. Other times it was members. In either case, box owners said they came out of the experience with a renewed appreciation for Greg Glassman’s original prescription.

“For the fitness that we are pursuing, every parameter within your control needs to be modulated to broaden the stimulus as much as possible,” Glassman wrote in “What Is Fitness?” “Your body will only respond to an unaccustomed stressor; routine is the enemy of progress and broad adaptation. Don’t subscribe to high reps, or low reps, or long rests, or short rests, but strive for variance.” 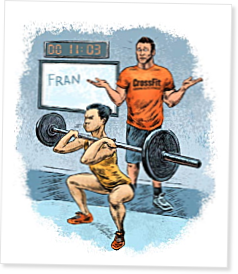 After stumbling across an ad on craigslist, CrossFit Salem owner Andy Bolliger succeeded in developing a fitness program designed to help seniors improve quality of life.

Square dancing was their… Continue Reading

It still amazes me that the overwhelming majority of conversation among coaches I witness revolve around programming.

In a world with crossfit.com, why even bother?

I can definitely understand minor deviations (scheduling, holiday workouts, birthday workouts, etc.). But as the core of your program, there is really no good reason to stray far from the main site. They literally give you the recipe right there. For free. Your job is to learn how to cook by studying from the best coaches in the world (Paoli, Starrett, Romanov). And then have enough confidence in yourself or your athletes to scale when you need to.

Thanks for reading, Chris!

I've found that boxes in my area have veered off from the basic classic CrossFit prescription to favor nice looking programming. Variance is key and the misconception that clients won't be satisfied and feel duped because the WOD was not 20 minutes long is false. With adequate programming any amount of time can be challenging. Programming and training should be done with purpose and not on a day to day basis.

Tweaking can most certainly be fun but sticking to basics has definitely proven to yield the best results for me. And as Glassman said, there is plenty of time for skill and or strength cycles in an 1 hour class. Variance is best! Why choose?

The Bowler part about clients and athletes wanting to experiment really resounded with me as I am that kind of person. The only way to let them get it out of their system is to allow them to experiment and then consult the numbers.

Thanks for the article!