Members of the CrossFit community explain how they cope and heal after losing a coach or member.

At Kitsap CrossFit, Moani Daniel was known as reserved but friendly, a hard worker who never complained about anything—not even workouts with her least favorite component: running.

Fellow member Lauriel Luther was seen as a powerful athlete and a positive person. Luther had competed in the 2010 CrossFit Games South West Regional and was always focused on helping others.

Within weeks, Kitsap CrossFit lost them both.

On March 9, 2014, Daniel died of a rare complication during childbirth. On April 2, Luther passed away after a lengthy struggle with brain cancer.

“We knew that Lauriel was in the final throes of her battle with cancer, and so we had—to some degree—been preparing ourselves for that moment, and then to get blindsided with Moani’s death was a real shock to the system,” said Dan Hollingsworth, program director at Kitsap CrossFit.

CrossFit athletes are accustomed to supporting each other through struggles with the barbell and in search of PRs, but coping with grief is a new experience—until it happens.

“The unfortunate reality is that you’re occasionally going to lose some people, and that’s just a part of life,” Hollingsworth said.

And yet, he admitted, “We certainly don’t have an action plan for this.”

None of the boxes discussed below had a plan for dealing with the death of a member or coach. They wrestled through the process blind—from notifying their members to creating memorials to supporting each other through mid-workout bursts of grief. But examining the decisions they made shows that loss affects affiliates in similar ways, and that boxes can learn from each other in order to support their communities through a difficult time. 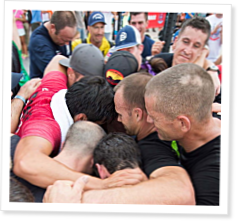 For Competition and Community: CrossFit Bellevue

The People of CrossFit Jozi

Dan Cerrillo, owner of CrossFit Bellevue, takes us on a tour of his large new facility located in Bellevue, Wash. He’s currently using 10,000 square feet of the 17,000 available.

Imtiaz Desai is the owner of CrossFit Jozi in Johannesburg, South Africa, but his CrossFit roots started in New Zealand when he was there for graduate school. When he returned to Johannesburg, he… Continue Reading

An Interview With Michael Latch

“All of our business is from word of mouth. I haven’t advertised once, and all 125 clients that we have are all from word of mouth,” says Chris Isernio, owner of CrossFit Old Bethpage/CrossFit… Continue Reading

The focus is on fun at the 10,000-square-foot facility that’s home to four female CrossFit Games… Continue Reading