He had been training for his first Ironman for 12 months. Dan Fontaine thought he had done everything right.

“The only problem was my plan had a big flaw,” 32-year-old Fontaine said almost five years later.

It never occurred to Fontaine that drinking too much during the race would dilute his blood-sodium levels to the point that he would vomit violently and be left on the side of the road, unable to continue for hours.

Fontaine was never officially diagnosed with exercise-associated hyponatremia (EAH), a potentially life-threatening condition characterized by dangerously low blood-sodium levels. But he has since researched what happened to him and has confidently deduced he was hyponatremic in 2010 at an Ironman race in Penticton, British Columbia.

An athlete who drinks too much during exercise runs the risk of diluting blood-sodium levels to below the normal range of 135 to 145 millimoles per liter. Symptoms of EAH include fatigue, nausea, vomiting and seizures. The most serious cases have led to fatal swelling of the lungs or the brain. Damage from brain swelling—exercise-associated hyponatremic encephalopathy (EAHE)—has taken the lives of at least 12 otherwise-healthy people since 1981.

Although Fontaine couldn’t pinpoint why he chose to chug water when he wasn’t thirsty, he knows the fear of dehydration was never far from his mind. Advertisements, event organizers, the reading he did and the people he knew kept telling him to drink more, ultimately to his detriment. 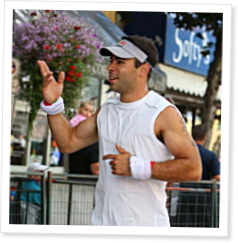 From Crunches to Climax

Emily Beers examines the physiology of exercise-induced orgasms, and female CrossFit athletes open up and talk about them.

It was 1995, a time when crunches were the in-vogue ab exercise.

It was just one short paragraph, but those five sentences have become the basis of… Continue Reading

2 Comments on “Ironman in Waterworld”

You can read more about hyponatremia and hydration here:

Thanks for reading and commenting!