Bill Starr died April 7 in Maryland. He was 77.

Starr first contributed to the CrossFit Journal with the November 2008 article “Overhead Is Rising.” It was introduced as follows:

“This article is both an instructional piece on overhead lifting, as well as a history of the unfortunate demise of overhead lifting in most strength and conditioning programs.”

The lines highlight the great value of Starr’s contributions to our publication. Indeed, we wanted technical info, but we also wanted to know about the history of strength training. We wanted to hear the stories that were all but lost in the period when barbells vanished and machines came to characterize modern weight rooms.

Starr had been lifting and coaching for decades by 2008, and we were eager to read and publish everything he wrote. Few knew more than Starr, and fewer still had enough skill with the pen—or typewriter, as it were—to share such a wealth of knowledge with a community hungering to learn more about Olympic lifting, powerlifting and strength training.

Over the course of six-plus years, Starr was one of the Journal’s most frequent contributors, offering technical training advice as well as anecdotes and tales culled from a lifetime of lifting and teaching others to lift. CrossFit Journal staff are saddened by his passing.

In memoriam, CrossFit Journal Managing Editor Mike Warkentin recalls six years of editing Starr in the PDF “Bill Starr, 1938-2015,” and we’ve collected all Starr’s CrossFit Journal articles below. We have two more still to be published.

Have a read, and raise a barbell to one who will be missed.

Stability Now!
Rise of the Machines
Warm-Ups, Flexibility and the Olympic Lifter
Pulling for all You’re Worth
The Arms Race and Olympic Lifting
Building Behemoths: Part 2
Building Behemoths: Part 1
Training in the Heat
Don’t Neglect Your Neck
The Forgotten Lift
Feet First
In-Season Training: The Critical Difference
Short and Simple—and Effective
Improve Your Jumping Ability
Deadlifts and the Strength Athlete
Upward, Onward
Using Workload to Move to the Next Strength Level
The Role of the Bench Press in Strength Training
Single?
Building a Strong Shoulder Girdle
Heavy, Light and Medium
Improving the Jerk
Girls Ride Horses, Too
Dips: The Forgotten Shoulder Exercise
The Value of Mental Rehearsal in Strength Training
Improving the Full Snatch
Warming Up and Stretching: The Neglected Disciplines
Keeping Your Adductors Strong
Improving the Clean
The Quick Lifts: Start Here
Building the Base of the Strength Pyramid
Learning How to Do Full Snatches
Learning How to Do Full Cleans
Strength Training and the Young Athlete
More Pop at the Top
Mastering the Jerk
The Holy Trinity of Strength Training
A Platform for Great Coaching
Don't Muddle the Middle
Pulling Exercises: Hip It Before You Whip It
The Power of Dynamic Pulling Exercises
Overhead Is Rising 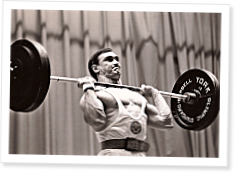 He’s coached over 1,000 games behind the benches of four NHL… Continue Reading

Mike Warkentin advises you to find your own limit in your next workout.

Ever watch an auction and want to choke the guy who continually adds a buck to the top bid?

You know the… Continue Reading

Well-written Mike. If this doesn't do him justice I don't know what does. Thanks for the quick links too. I'll be sure to read up on those.

Definitely one of the most knowledgeable, experienced voices in the community. When others lost the will to keep trying to make us better athletes, to leave the bro science behind, Mr. Starr was the unflagging voice in the wilderness, always fighting to make us better. More information, more points of view, more experience... this is a huge loss for our community, but at least we'll always have his writings, ALL of which can probably be read and re-read every few months to glean more and more details. RIP Mr. Starr, and thank you.

For anyone interested in making a donation in Bill Starr's name, a fund has been established at Johns Hopkins University. Go to https://secure.jhu.edu/form/bju and select Bill Starr Memorial Fund in the second drop down.