Despite a wealth of scientific research on hydration and cramping, few athletes and coaches know anything about preventing and treating muscle cramps.

Trent Cole never knew when they were going to strike: Exercise-induced muscle cramps were a serious problem for Cole when the Philadelphia Eagles drafted the University of Cincinnati product in 2005. No matter what he tried or how much fluid he drank, he couldn’t stop the full-body muscle cramps.

“I hydrated as much as I could,” Cole said, “and I still cramped.”

Fortunately, Cole had access to Sandra Fowkes Godek, Ph.D. The director of the Heat Illness Evaluation Avoidance and Treatment (HEAT) Institute at West Chester University in Pennsylvania, Fowkes Godek has been working with the Eagles for 12 years, studying their sweat rates, sweat-sodium concentrations and blood-electrolyte levels. Fowkes Godek has long known something most athletes and coaches do not: Dehydration does not cause muscle cramps. Scientists have tried—and failed—to link dehydration and muscle cramps.

So Fowkes Godek treated Cole with a mix of vitamins, beta glucan, sodium and chloride.

“My cramps went away,” said Cole, who currently plays defensive end for the Indianapolis Colts.

Scientists still do not know exactly what causes muscle cramps. Some studies point to fatigue, while some scientists believe cramps are a neurologic issue that can be remedied with a salty diet. However, scientists agree on one thing: Sports drinks do nothing to relieve cramps. Still, the misconceptions persist, and athletes regularly consume fluids in vain attempts to treat cramps. Sometimes, that approach has fatal results.

In August 2014, Zyrees Oliver, a high-school football player in Georgia, passed out after football practice and was taken to the hospital, where he died due to exercise-associated hyponatremic encephalopathy (EAHE). Essentially, excessive fluid intake diluted his blood sodium to dangerous levels and caused his brain to swell. According to relatives, Oliver cramped in practice and drank at least 2 gallons of water and 2 gallons of Gatorade.

His death was preventable.

Here, we look at the science behind muscle cramps and common hydration practices in all levels of football. Dispelling myths about muscle cramps and detailing the dangers of overhydration can help athletes in all sports, especially those who practice or compete for multiple days in a row. 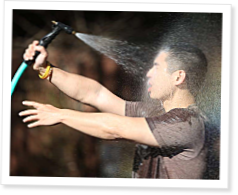 Ben Bristow was just being polite.

Some athletes and experts swear by ice baths, while others say they’re useless or even detrimental. Hilary Achauer investigates the potential end of the Ice Age.

My experience with cramps has been that icing them will relieve them tout de suite. There has been no research on this as far as I know, and I have checked. All I know is that since the night my wife saved my life with a desperation move involving baggies filled with ice placed on my cramping quads, pecs, glutes, and hammies every instance of cramping I've experienced, my soccer playing, crossfit training sons have experienced, and many of their teammates have experienced have been immediately alleviated with ice application to the cramping muscle.

This plays into another article written by Hillary in the Crossfit Journal, "Ice, Ice Maybe?" I would bet that the ice baths went a long way toward preventing massive cramps in the 'Games' competitors in the searing sun of Carson, California in the summertime. Maybe recovery is iffy, but cramp prevention is highly likely, at least in my estimation.

So, how do we get someone to research this aspect of human body reactions to high temperature, high activity conditions?