On Episode 383 of CrossFit Radio, host Justin Judkins interviewed California Regional champion Brooke Ence. This episode was webcast on May 27, 2015.

1:38 At the conclusion of the ultra-competitive California Regional, Ence stood atop the podium and claimed her first trip to the CrossFit Games. She spoke about her training since 2011 and described how she plans to avoid underperforming as so many Games rookies do when the pressure mounts. She explained her approach to nutrition and talked about her response when women tell her they want to be fit but don’t want to look like she does. As the demo athlete for Open workouts, she addressed the criticism that she had an advantage because she demonstrated the movements in videos put together before the tests were announced. 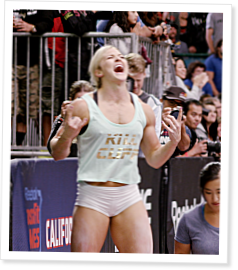