By Mike Koslap and Michael Dalton

For the second consecutive year, CrossFit Inc. sponsored Operation Surf Santa Cruz, held April 21-27. The program serves wounded members of the military by allowing them the opportunity to rehabilitate through what some call a “healing” outlet: the ocean.

“Operation Surf is a weeklong recreational rehabilitation surf clinic when we bring out our wounded warriors in transition—men and women—that were primarily injured in combat in Iraq and Afghanistan,” says Van Curaza, president of Amazing Surf Adventures, the organization that created the program.

This year, CrossFit invited some adaptive athletes from its community to join in the fun. CrossFit Redefined athlete Angel Gonzalez was part of the event held in Santa Cruz, California.

“Last time I was surfing, I walked in the water and came out in a wheelchair. So going out with all my new friends from the new adaptive world, man, it’s been absolutely amazing,” Gonzalez says. “My accident happened in 2001, so over the last 14 years, I haven’t had the opportunity to get back on the water and surf. So when this opportunity came about, I was like, ‘Yes, let’s do it. I’ve got to close that chapter.’”

Operation Surf started with one wounded hero’s desire to surf. Today, it serves the community of wounded warriors and shows them anything is possible—even after trauma. For many, the experience is just the first step toward rehabilitation after injury.

“I really didn’t think that I was going to be able to do physical stuff like this anymore,” says U.S. Army Staff Sgt. Jeremy Breece. “I thought I was going to be in the wheelchair, real limited in what I can do. It’s just opened my eyes to see that I can still do badass stuff.” 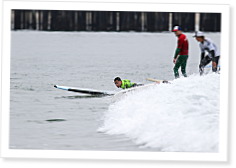 By Mike Koslap and Michael Dalton

Will Johnson is a man of many talents. The 26-year-old is the starting fullback for the Pittsburgh Steelers, as well as a devoted husband, philanthropist and CrossFit athlete.

Johnson is a member… Continue Reading

The CrossFit Experience With Brian MacKenzie

Brian MacKenzie says endurance is a large part of CrossFit in this video filmed at the CrossFit Experience at the 2012 Reebok CrossFit Games.

The founder of CrossFit Endurance has attendees… Continue Reading

This sounds like a great program! So nice to see surfers giving back to the community and especially our service men and women. Seems like having traction pads that cover the entire surfboard helps keep these athletes securely on the surfboards while on the waves.