“Whatever It Takes”—Greg Glassman in New Zealand

In March 2014, Richard Beddie—CEO of the Exercise Association of New Zealand and spokesperson for the New Zealand Register of Exercise Professionals (REPs)—made unfounded claims in the media that CrossFit training has caused deaths.

“CrossFit has resulted in six deaths overseas and rendered an Australian man paraplegic,” Beddie told Stuff.com.nz. Beddie later denied making the statement, though the reporter who quoted him asserted she had been entirely accurate.

Not without motive, Beddie hoped to get CrossFit to partner with REPs, which would force CrossFit trainers in New Zealand to pay an annual fee to Beddie’s group. Beddie promised if CrossFit affiliates registered with the organization, he could make critical stories about CrossFit disappear. At the time, Beddie was chairman of the International Confederation of Registers for Exercise Professionals (ICREPs), whose members include the National Strength and Conditioning Association (NSCA) and the American College of Sports Medicine (ACSM) through their membership in the United States Registry of Exercise Professionals (USREPS). Both the NSCA and ACSM have released baseless claims about CrossFit, and CrossFit Inc. has filed separate lawsuits against Beddie and the NSCA.

Glassman said he believes CrossFit has a moral obligation to protect its affiliates and keep owners, trainers and members informed. They are, after all, what Glassman calls “the heart” of the CrossFit community.

“You’re doing the right things for the right people for the right reasons, and the least I can do is defend you at every opportunity I have with everything I’ve got,” Glassman says. “And I will do whatever it takes to keep you free, to keep you safe and to keep your reputations just what they deserve to be.” 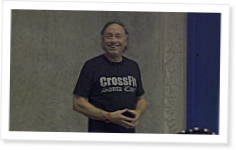 Tony Edgerton spent 13 years as a personal trainer working at Globo Gyms. He started at 24 Hour Fitness, worked his way up to management and “hated it,” he says, so he… Continue Reading

Let Me Tell You About CrossFit

You haven’t heard of CrossFit? Let me tell you about CrossFit.

2 Comments on ““Whatever It Takes”—Greg Glassman in New Zealand”

Great stuff as usual Coach. Thanks for everything!

Good on you I like your stand. I am not level 1 certified yet but all goes well should be soon. I have been a personal trainer for 11 years and have paid REPS a lot of money over the years for nothing; I am continually forced by this industry to do so…. Thank you for standing up, I posted on their page when that media realise came out and shared my dislike for their misinformation.