CrossFit Defense shows Theresa Smith she already has the tools she needs to defend herself.

Like many other CrossFit gyms, Raise the Bar CrossFit in Ontario, Oregon, is in an industrial area.

We want our members to be able to work out in a place where they can be themselves, and industrial areas are home to large warehouse spaces where weights can be dropped and music played loudly at all hours of the day without pissing off the neighbors. Rent is often cheaper in industrial areas, but these affiliate-friendly parts of town can be places where we have to look out for each other and ourselves.

The small city in which I run my affiliate has the reputation of being the most dangerous in the state. We’ve had break-ins, vandalism, drug busts and even murders in the neighborhood in which I go to work every day, and safety is a very real concern.

The final straw was when someone broke into a coach’s car. It happened in broad daylight: A class of athletes worked out just 20 yards away while a thief smashed a window and stole a wallet. The incident destroyed the sense of safety at my gym.

Around the time of that event, I posted on a Facebook page for CrossFit affiliate owners to see what others do to stay safe when they are at the gym alone so often. The response was tremendous and very passionate.

One answer that kept coming up intrigued me: Check out Tony Blauer’s CrossFit Defense course. I decided it was worth a shot and booked myself into the Trainer Course at CrossFit Unbroken in Denver, Colorado, set for the following month. 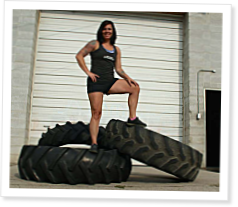 Dave Gordon lives a life many affiliate owners will understand: full-time job, family responsibilities and a box to run in his “free time.” His gym, CrossFit South Aurora in Colorado, runs both… Continue Reading

You Were Saying … With Jasmine Danker

Jasmine Danker wanted to be a “tiny-call-a-gist” but couldn’t be happier to be a CrossFit trainer.