You can lead a man to water, but you can’t make him drink. Add sugar, salt, artificial flavors and a good story, and he’ll drink himself to death.

Since the early 1960s, sports-drink companies have worked to sell as many beverages as possible, and now the toughest market segment—people who just aren’t thirsty—has become the target thanks to clever advertising and sponsored research.

Gatorade created the “sports beverage” category and continues to dominate even though its marketing claims contradict scientific evidence, as shown in a document from the California Center for Public Health Advocacy.

Gatorade’s benefits have been hyped by owners of the formula, beginning with Stokely-Van Camp Inc.’s assertion that Gatorade was absorbed by the body “twelve times faster than water,” which was later discredited by its next owner, Quaker Oats. Quaker, already adept at using “research” as a marketing tool, founded the Gatorade Sports Science Institute (GSSI) in 1988. A year later, Gatorade sponsored the American College of Sports Medicine (ACSM), which in 1996 produced research supporting maximal intake of fluid—especially palatable fluids containing carbohydrates—even before an exerciser became thirsty.

Gatorade’s marketing aside, experts are aware that hydration is actually very simple.

“We have a 300 million year developed system that tells you with exquisite accuracy how much you need to drink and when you need to drink. It’s called thirst,” hydration expert Dr. Timothy Noakes wrote in “Waterlogged: The Serious Problem of Overhydration in Endurance Sports.”

Noakes is right, but sports-drink companies have somehow convinced us to drink when we’re not thirsty. 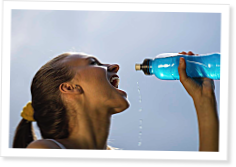 Nicole Carroll writes of her struggles with implementing the Zone Diet in, “Getting Off The Crack.” At first Nicole thought she was starving and wouldn’t… Continue Reading

7 Comments on “A Sticky Story”

I want to know what Gatorade has done to deserve all this negative attention. Did they not want to sponsor crossfit? There are tons of other companies and people to focus on when it comes to promoting negative things in life. How about this, start writing about beer and liquor and how many innocent people die from dumbasses getting in a car after drinking. How about doctors throwing meds at everything and getting people hooked,instead of finding the real problem and solving it. How about snooty people spending 1 million dollars on grass fed, free range goat steaks and still walk around skinny fat, because the coaches or nutritionist in the box really have no freaking clue about what they are doing. You really need to find something else to write about. I don't understand why a company that portrays itself as being so positive, can continue a witch hunt on one company. Enough is enough. Dead Horse.

Are you aware that Gatorade funds the entities lobbying to make CrossFit affiliates illegal? Or that these same Gatorade-sponsored entities and "scientists" have been engineering an anti-CrossFit PR campaign, spreading baseless claims about elevated risk of injury, for over 5 years? Or that Gatorade-sponsored entities are lobbying to gain government-granted control over the entire fitness industry through licensing boards?

Perhaps if you'd you paid attention to the content you're attempting to critique, you'd have learned about these crucial facts. Not only is Gatorade responsible for spreading false information, but along with Coca-Cola, it's funding a campaign to legally silence its most effective critics. Namely, CrossFit.

Well, for one thing Gatorade has convinced people to drink such large quantities of liquid during exercise that deaths have occurred from hyponatremia. This condition was insanely rare prior to Gatorade, the GSSI and the ASCM recommendations of trying to drink ahead of thirst.

I take it personally because long distance running has been a passion of mine for many years and these guidelines were aimed at people like me. Many runners I know, including myself, have suffered physically and in athletic performance, for following guidelines promoted by scientists who recommend drinking as much as possible, even when their own research doesn't support it. And they do this for money. It's not just a simple mistake in logic. That could be forgiven and corrected by follow up studies. These scientists and beverage companies skew their scientific conclusions in ways that are intended to increase profits. They are not looking out for the customer, just profits.

If only one person died from using the recommendations of Gatorade and it's scientists, that would be enough for the negative attention they are now getting.

It's too little, too late for those that have died.

That's what I was getting at. I knew there had to be an underlying issue as to why you have taken Gatorade to Hitler status. Let them do what they want, stand up and fight for what you think is right. But don't stoop to their level by making a DRINK out to be some kind of new age poison. It just sounds so whiny, over and over about hydration. If people don't get it yet, then write a post on fixing stupid.

If you have suffered because you were dumb enough to try something without proper research or proper evidence then YOUR at fault not them. Them telling you to drink it is the same as every other product on the consumer market. THEY ARE TRYING TO SELL A PRODUCT.

Sorry, Zane. Should have recognized you as a troll.

I have done nothing but bring out the obvious. There has been no less than four articles about hydration or gatorade. I like most of the write ups on here. Im just tired of hearing people bad mouth others without really telling the audience why they are doing so. I am also a huge proponent of owning your mistakes instead of crying that scientists told me to drink a lot so I did. That is one of the main things wrong with the world today, no responsibility, no accountability. Do you want to be a part of the problem or part of the solution. But I guess i shouldnt say anything because its not politically correct.