This flavorful recipe includes ginger, garlic, onion, cilantro and a homemade masala. To spice it up, Massie adds cayenne and chili pepper, but that’s optional depending on your yearning for burning.

To put the meal in the Zone, Massie recommends weighing the chicken with the sauce, then adding it to the spaghetti squash, which can be blocked out before the sauce is ready. He breaks everything down into six three-block meals.

“My hope is to bring India to the masses, and this is my first attempt with my chicken tikka masala,” he says. 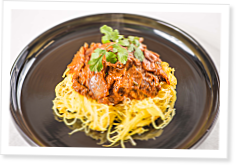 In these chilly winter months, nothing hits the spot like a bowl of hearty chili. Nick Massie of PaleoNick.com brings us this simple recipe to warm your soul—and your belly.

Nick Massie of PaleoNick.com brings us slow-cooked ribs and sweet potatoes. Watch as he takes a meat-and-potatoes combo and makes it Zone-worthy.

“Three-block portions that are tough to… Continue Reading

The Foundation Is Nutrition

There are a multitude of ways to make pastel de papa. This particular recipe is Zone friendly.

“(It’s) kind of like a shepherd’s pie with sweet potatoes,” explains… Continue Reading

Combining the CrossFit training methodology with a diet of meat and vegetables, nuts and seeds, some fruit, little starch and no sugar brings “a jet stream of adaptation,” says CrossFit… Continue Reading