After focusing on competition in 2008, Ben Smith wins the CrossFit Games in 2015.

July 26, Ben Smith was crowned the Fittest Man on Earth.

Smith, a podium finisher in 2011 and 2013, was far from a long shot heading into the competition, but he also wasn’t the odds-on favorite. Many looked to Mathew Fraser, last year’s second-place finisher, as the heir apparent to four-time champ Rich Froning Jr.

Fraser won the CrossFit Games Open, dominated the East Regional and looked like a man ready to cast his rivals aside like 10-lb. medicine balls at the Games. Smith finished third in the Open but fourth in the Atlantic Regional, placing 12th or lower in three of seven events—not an ideal way to generate momentum for the tests waiting at the StubHub Center.

But you might have seen Smith coming anyway—especially if you were around in 2009. 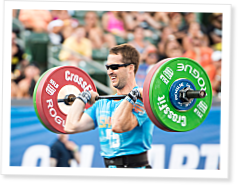 He’s coached over 1,000 games behind the benches of four NHL… Continue Reading

What’s it like to win the CrossFit Games Affiliate Cup? According to members of CrossFit Fort Vancouver, it’s pretty cool.

The victors returned triumphant to a gym ready to… Continue Reading