Believing sports drinks are a necessary part of athletics, many athletes fail to notice substantial amounts of added sugar that can affect their health and performance.

Tommy Marinoff used to live off pizza, burgers and Coke. When he went to the gym, he often guzzled a Gatorade mid-workout. He knew sugar-laced sodas weren’t the healthiest options but believed Gatorade was a wise choice, especially for athletic performance and recovery. Indeed, sports beverages are nothing less than essential athletic fuel, according to advertising.

Marinoff never used to read the labels on the beverages he consumed. At 5 foot 3 and 112 lb., he wasn’t overweight, so he wasn’t concerned with consuming too much sugar.

Everything changed in October 2014, when Marinoff started experiencing unusual symptoms: frequent thirst, constant urination, muscle weakness, unexplained weight loss. He ignored the symptoms for a month before he saw a doctor.

Marinoff weighed just 100 lb. when he was diagnosed with Type 1 diabetes, an autoimmune disease that limits or prevents the body’s production of insulin. While Type 1 diabetes is considered a genetic disease, Marinoff’s doctor told him he believed a simple cold caused his autoimmune response. Researchers are not certain what triggers the onset of Type 1 diabetes in adults, according to Mayoclinic.org.

For the first time in his life, Marinoff knew it was time to start learning about the sugar he was consuming on a daily basis. One of the first things he learned was he’d have to give up sodas and sports drinks if he wanted to take control of his health. 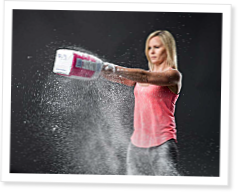 Make Your Life Better: Get Horizontal

Patti: A Journey Toward Wellness

After struggling with her health for years—surviving cancer and developing Type 2 diabetes—Patti Goldenson decided to turn her life around. Since joining CrossFit South Bay in Torrance… Continue Reading

Tipo for the reader: 'Pure, White and Deadly' by John Yudkin and Robert Lustig