The Myth of Adrenal Fatigue

By Kamal Patel and Kurtis Frank

Did you overwork your adrenal glands or are you getting worked by mythology and marketing?

Sticking to a physical exercise routine is tiring, but the soreness and fatigue from a good workout can easily be alleviated with a full meal and plenty of rest, so you’re raring to go by the time your next workout rolls around.

That’s the theory, at least.

When real life gets in the way, recovery can suffer. Sometimes, fatigue persists for so long between workouts that it doesn’t even seem to be caused by the gym.

If you’ve ever visited a supplement store in an effort to alleviate the symptoms of fatigue, you might have been told you’re suffering from adrenal fatigue. This is a common error. In short, adrenal fatigue doesn’t actually exist.

“Adrenal fatigue” is a marketing buzz term designed to sell products. Though the supposed symptoms of adrenal fatigue—including brain fog, difficulty paying attention and lethargy—are real, adrenal fatigue itself is not a condition recognized by the medical field. If the symptoms are severe enough to interfere in day-to-day life, they could be referred to as the effects of chronic fatigue syndrome but are otherwise simply referred to as “general fatigue.”

If adrenal fatigue doesn’t exist, why do we know and talk about it? 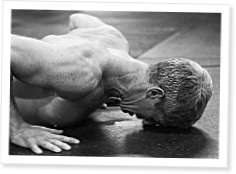 This is the 6th episode of the Weekend Edition of CrossFit Radio, which aired at 6pm PDT on Saturday, April 18th, 2009.

Study results suggest guzzling a beer after a workout might actually be more productive than chugging a sugar-laced sports drink.

On March 12, 2010, Coach Greg Glassman and a small crew visited Dr. Scott Connelly in the Los Angeles offices of Progenex. The intent was to tap into Dr. Connelly’s vast knowledge of metabolism… Continue Reading

3 Comments on “The Myth of Adrenal Fatigue”

Agree, and this position is supported by the Mayo Clinic as well, check out this article: http://www.mayoclinic.org/diseases-conditions/addisons-disease/expert-answers/adrenal-fatigue/faq-20057906

Umm, I would be very careful to dismiss new discoveries in nutrition medicine just because the condition is not politically correct at this time. There are plenty of conditions that were not recognized by the medical community at first, only to be recognized later. It's the simple problem of "new ideas take time." Yes, there is science involved, but often like the study of history, science also has it's subjective aspects. It depends on the interpretation of data. I only post this to help people who have gone the medical route (which is a blessing, of course) with frustrating conditions only to be told "live with it." At least holistic naturopaths are using nutrition to help people heal from conditions that are not yet "medically correct". It's not like taking western medical drugs are the perfect answer either, and they tend to be reactive rather than pro active...

Here is a good discussion on this topic: http://thyroid.about.com/b/2010/10/28/hormone-foundation-endocrine-society-adrenal-fatigue-controversy.htm