After stumbling across an ad on craigslist, CrossFit Salem owner Andy Bolliger succeeded in developing a fitness program designed to help seniors improve quality of life.

Square dancing was their favorite. But as Bonnie Johnson aged, her balance became unreliable. She began using a walker. Square dancing with her husband, Norman, was no longer possible. In summer 2014, the couple moved in to Hidden Lakes, a senior-living community in Salem, Oregon. Both Norman and Bonnie used walkers to stay mobile.

“She was falling over when she moved in,” said Joyce Fowlkes, enrichment coordinator at Hidden Lakes.

That changed after the couple began attending 30-minute exercise classes twice a week. After a few months, Bonnie was able to occasionally forego her walker in favor of her cane. Even 88-year-old Norman, who growled every time his wife made him go to the fitness classes, saw notable improvements in his mobility.

The Johnsons are among several Hidden Lakes residents who have improved their strength, balance and flexibility since the 30-minute fitness class started on Oct. 1, 2014.

“I definitely have noticed a major difference,” Fowlkes said.

That difference was Andy Bolliger, owner of CrossFit Salem. Over the course of his time at Hidden Lakes, he’s come to develop an exercise program tailored for the elderly.

“It’s the best (senior exercise) program I’ve seen … as far as I’m concerned,” said Fowlkes, who has worked in the senior-living business for 17 years. 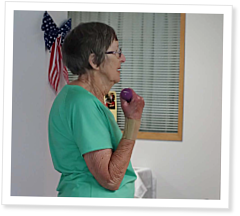 Affiliate owners offer advice on how to handle the rush when January and February bring prospective clients with fitness goals for 2016.

No Time for Patty-Cake

Affiliate owners work to please every client, but when an athlete is clearly unsuited to a gym, it’s time to take action.

Doug Chapman has seen it all: stalking, rudeness, willful ignorance.

Straight-talking CrossFit trainers reveal why they believe the tough-love approach is best when it comes to coaching. Andréa Maria Cecil reports.

Although soft-spoken, Jeff Martin is known for… Continue Reading

It is amazing talking to seniors and seeing just how far they have fallen away from fitness. I am a fitness director at a retirement community and have been doing crossfit workouts with the residents for over 2 years now. Initially it blew my mind when I asked them to lay down and stand up. "How?" The basic movements we take for granted have to be broken down into safe, simple steps. The improvements I have seen here have put own to shame. Those that couldn't even touch the floor are now doing burpees. Those that couldn't stand up out of a chair without assistance are doing dumbbell squats with impressive weight. Basically doing the ordinary, extraordinarily well. Crossfit, when appropriately scaled works for all ages.

We have finally found some money in the budget for bars and bumpers. I am excited to see what these residents are capable of.