Change is afoot. As CrossFit Inc. Founder and CEO Greg Glassman explained Big Soda’s many evils to CrossFit athletes during the first few days of the California Invasion, seismic shifts were happening outside affiliate walls.

On Nov. 6, the University of Colorado School of Medicine announced it would return a US$1 million gift from The Coca-Cola Co. Days later, the U.S. Food and Drug Administration recommended a daily limit on sugar consumption for the first time. And in the city of Riverside, California, the City Council unanimously voted to adopt guidelines frowning upon the city’s providing food and beverages with added sweeteners.

Still, there’s work to be done. The solution begins, in part, with a health-warning label on sugar-sweetened beverages, Glassman said.

“If we get the label on the can … it will be increasingly hard for Coke to fund our enemies,” he noted, alluding to Big Soda’s links to the United States Registry of Exercise Professionals (USREPS), the American College of Sports Medicine (ACSM) and the National Strength and Conditioning Association (NSCA).

The label—which Sen. Bill Monning has introduced in the Senate during the previous two sessions of the California Legislature—would contain a simple warning statement.

He called on members of his audiences to visit CrushBigSoda.com, a site through which they can send their senator an email. 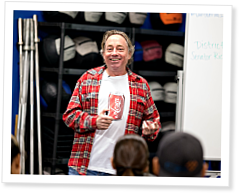