As a child, Oscar Ramos was not allowed to go outside to play unless he drank his entire “fat bottle” of lime-flavored Gatorade.

A 32-ounce bottle of the so-called thirst quencher contains 56 grams of sugar, or about 14 teaspoons—more than double the 6-teaspoon daily limit the World Health Organization recommends for normal-weight adults. Added sugar is linked to metabolic and chronic diseases including obesity, diabetes and heart disease.

Today, 37-year-old Ramos knows better than to drink Gatorade, soda or other sugar-sweetened beverages. But that’s not the case for all of his members at CrossFit Downey in Southern California.

“It’s our culture,” said Ramos, who is half Mexican and half Puerto Rican. “It’s gnarly.”

Hispanics have some of the highest percentages of diagnosed diabetes in the United States: 12.8 percent, according to the U.S. Centers for Disease Control and Prevention’s “National Diabetes Statistics Report, 2014.”

This is what Ramos must battle as he attempts to educate athletes at his gym, which sits a mile northwest of a Coca-Cola bottling plant.

“It’s just educating people,” Ramos said, “not on soda but what soda’s trying to do and what … soda can do to you." 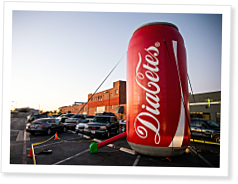