Days before Pete Katz’s visits to his primary-care physician, he would go on a diet. It was his vain attempt to nudge his health markers in the right direction. But the short-lived change had little effect on an increasingly grim reality.

“Pete was in a common situation for many patients in that his weight was not ideal. And early on he did not have significant health problems from that,” said Dr. J. Harry Isaacson, Katz’s physician of roughly 15 years. Isaacson is also assistant dean for clinical education at the Cleveland Clinic Lerner College of Medicine in Ohio.

“Many people end up crossing a threshold … where they start to accumulate different health problems from their weight,” he said.

For Katz, that threshold was a Type 2 diabetes diagnosis at the age of 41. To treat the disease, the doctor prescribed oral medication. After three years, it wasn’t enough. So Isaacson prescribed an injectable drug. This was in addition to Katz’s treatments for anxiety and high blood pressure. Injecting himself with medicine and constantly monitoring his insulin put enough fear into Katz that he finally heeded the advice Isaacson had long been giving him: Change your diet and start exercising.

Before then, Katz had tried multiple diets and exercise programs over the years; nothing stuck. This time, he started following the Paleo Diet. About a month later—in November 2012—he had his first class at CrossFit Painesville in Ohio.

Six months after that, Katz was able to discontinue all of his medications.

“He’s basically cured his diabetes with his attention to lifestyle,” Isaacson said. 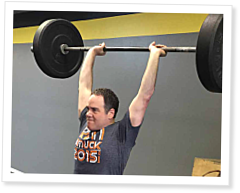 Happy to be Last and Alive

“I wanted to get healthy again.”

Nine months earlier, at 33, Lund had been diagnosed with Hodgkin’s… Continue Reading

Managing stress, anxiety and fear is part of being an elite athlete. Andréa Maria Cecil talks to CrossFit Games competitors and coaches who share their approaches to fighting inner battles.

You have two choices… Continue Reading

After being among the youngest individual competitors at the regional level of the 2011 Reebok CrossFit Games, 19-year-old Trevor James wants to make CrossFit his life and career. Andréa… Continue Reading

This article makes me think that laziness itself could be a disease.

To be more specific, if a good diet and CrossFit are enough to take you from pathological to fit, why don't people do it. Pete is just another great example of what happens when you're willing to make changes and work hard.

Can't find how to email CrossFit HQ so putting it here in the hope someone might read it.
Just in from South Africa where Professor Tim Noakes is being taken to court for giving unconventional (LCHF) advice to a nursing mother. CrossFit, grab hold of this; this may be the legal lever needed to whack Big Sugar!!!