Just in time for Super Bowl Sunday! In this video, Nick Massie of PaleoNick.com shares his recipe for kickin’ like Van Damme chicken, a dish he calls “the bigger brother” to his bacon-wrapped jalapeño poppers.

Massie’s kickin’ chicken features a careful arrangement of chicken fingers on a bell-pepper base. That combo is topped with jalapeño slices and wrapped in thin-sliced bacon, and it’s served layered over a creamy puree of parsnips.

In preparation for the dish, Massie performs a chandelier cut on a bell pepper to make the popper body. He then divides the chicken and jalapeños and starts stacking. After Massie wraps each stack in bacon using a “double tuck” technique, the poppers are ready to go in the pan.

This dish, Massie notes, is special because it uses parsnips for its carbohydrate. Parsnips, he says, are a sweet and minty “alternative to most of the carbs that we eat regularly.”

Once the poppers reach an internal temperature of 165 F, they can be placed on top of the pureed parsnips. For a finishing touch, the chef adds some Massie Mayo and cilantro. 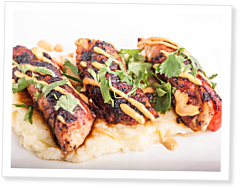 Chef Nick Massie shows you a different take on the first meal of the day with a breakfast gallimaufry.

In this video, Nick Massie of PaleoNick.com takes a brief respite from wall-ball shots to share his recipe for Thai turkey meatballs.

Chef Nick Massie shows you how to whip up Alaskan king crab, lobster tail, scallops, shrimp and cod for a seafood bouillabaisse.

2 Comments on “The CrossFit Kitchen: Kickin’ Like Van Damme Chicken”

Is this a real Van Damme chicken recipe ?!
Going to make for my next dinner with friends, I wonder what will their reaction be when I tell them :D