“I believe me getting in better shape, me losing, you know, that extra weight I needed to lose, I think ... that’s one of the areas that never gets the attention it needs to.”

Hip-hop artist Rick Ross said that in 2014 in the CrossFit Journal video “RossFit.”

And he’s right: His dramatic weight loss and improved health and fitness haven’t gotten the attention they deserve.

Ross stands in contrast to hip-hop DJ and TV personality André “Doctor Dré” Brown, who was the subject of the June 12 New York Times article “D.J. Doctor Dré Is Waging a Public Battle With Diabetes.”

Brown—not to be confused with West Coast rapper and producer Andre “Dr. Dre” Young—is one of more than 29 million Americans with diabetes. According to the New York Times, Brown acquired Type 2 diabetes 10 years ago due to a poor lifestyle and has since lost a toe and his sight to the disease. He’s planning to have weight-loss surgery to alleviate his symptoms and wants to showcase the process and recovery on a proposed reality-TV show.

Brown’s intentions are honorable: He’d like to help others avoid the mistakes he made—“We can prevent this. We can cure this,” he told the Times. But featuring bariatric surgery as a solution for chronic disease places a lot of emphasis on an extreme measure CrossFit Founder and CEO Greg Glassman referred to as the “worst idea in the history of modern medicine.”

Here’s the problem: A reality show featuring bariatric surgery as a treatment for Type 2 diabetes shines a spotlight on a last-ditch effort that comes with a lot of risks. It’s like showcasing an arm amputation because a cut on a hand was left untreated for years and no other options remained.

We’d prefer to focus on the dramatic effects of diet and exercise—non-medical health care that works. Medicine doesn’t have an answer that’s not symptomatic treatment. Medicine’s answer doesn’t work.

We know diet and exercise alleviate symptoms of chronic disease. We have proof. The stories are getting old. For but one example, read about Pete Katz, whose physician, Dr. J. Harry Isaacson, said Katz “basically cured his (Type 2) diabetes with his attention to lifestyle.”

For another example of how diet and exercise can be used to reduce disease risk, you need only look to Ross—who works in the exact same industry as Brown.

Since starting CrossFit in 2013, the Grammy-nominated Ross has lost about 100 lb. through diet and exercise. After two 2011 seizures sent him to the hospital and forced the artist to evaluate his health, he cut out soda, drank less, adjusted his diet, slept more and started working out.

Ross—who is not diabetic—isn’t perfect. He works in an industry characterized by late nights, travel and parties, and he owns a host of Wingstop franchises. Be that as it may, he changed his lifestyle, lost a large amount of weight and significantly reduced his risk for chronic disease. As they say, an ounce of prevention is worth a pound of cure.

We know we can prevent, control and reverse Type 2 diabetes through diet and exercise.

If we’re going to look to the hip-hop community for inspiration to lose weight and improve health, we’ll choose Ross over Brown.

Additional video: “From Couch to Capable” by Gary Roberts, published May 5, 2014. 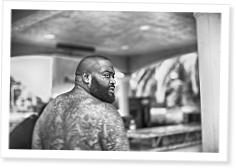 A recent CrossFit Journal editorial on bariatric surgery for weight loss set off a lively debate on Facebook.

The discussion below the June 14 post included a number of comments, including… Continue Reading

The National Strength and Conditioning Association has announced its 2016 National Awards winners. Recipients, who are chosen for “outstanding achievement” in their field, will receive these… Continue Reading

When to Fire Your Fitness Magazine

By Roy Masters’ reasoning, most weightlifters in the Olympics aren’t very strong.

Spotted barbell biceps curls and white A-shirts, with just a hint of oil in place of sweat?

Men’s Journal might have rethought the opening image for “When to Fire Your Personal Trainer: 4 Red Flags.”