Accounts of deadly tumors date as far back as 3,000 B.C. in ancient Egypt.

Yet despite centuries of study, cancer is—after cardiovascular disease—the world’s second-leading cause of death, claiming more than 8 million lives in 2012 alone, a number that’s expected to nearly double over the next 20 years.

Prevailing theories on the origin of cancer held by most researchers and oncologists today dictate that cancer is thought of predominantly as a genetic disease, whereby damage to a cell’s nuclear DNA turns the healthy cell into a cancerous one.

But what if we’ve only been studying a piece of the puzzle for all these years? What if cancer is just as much about what we put into our bodies as the genes we were born with?

Thomas Seyfried, a Boston College biology professor with a doctorate in genetics and biochemistry, disagrees with the idea that cancer is primarily a genetic disease.

“That’s all misinformation,” said the author of the 2012 book “Cancer as a Metabolic Disease.” 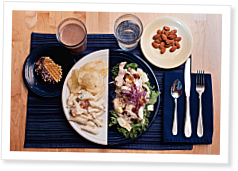 Dr. Eugene Fine and Thomas Seyfriend talk about the links between sugar and cancer.

Thomas Moore loses a fight with a river but gets a rematch in rehab.

A recent CrossFit Journal editorial on bariatric surgery for weight loss set off a lively debate on Facebook.

The discussion below the June 14 post included a number of comments, including… Continue Reading

"And perhaps even more important is that if our dietary habits changed in
general, these same effects could be preventing cancers to begin with.”

You can talk about diet all you want and it is indeed a HUGE factor, BUT, why are more people not talking about the people living on Chlorinated water supplies ie; municipally treated water, that are 93% more likely to develop cancer over people getting their water from non chlorinated sources. Read “Lessons from the Miracle Doctors” by John Barron Chapter 11 “Dying of Thirst”. The fact that the public has not yet been informed by the FDA, CDC or the government is irresponsible and unforgivable. Read more here:

Further in the article:

“It’s very hard to change dogma,” Seyfried said. “It’s a religion. People who are devout in their religion, regardless of what that religion happens to be, how easy is it to change their view? It’s impossible. This is what’s happened to the cancer field.” But that’s not the only reason, according to Seyfried. “There’s a vested interest in not knowing about it,” he said. “Don’t forget, think of the revenues that are generated from what we’re doing today ... all of this is sustaining momentum on the part of the pharmaceutical and academic industries. And what happens if someone comes along and says, ‘Hey, it’s not a genetic disease. It’s a mitochondrial metabolic disease."

The reason we are in this mess with cancer is that those in power or those with a proposed education are loyal to their wallet. The other reason we have this high rate of cancer is our societal loyalty to the status quo that demands we never look outside our jail cell and question what is really going on. Watch “The truth about Cancer: A Global Quest - The True History of Chemo & The Pharmaceutical Monopoly https://www.youtube.com/watch?v=KqJAzQe7_0g

We must begin building a society that is loyal to their own heart, in order to overcome this disaster. We begin at the root of the tree and grow generations of children that are so mentally and emotionally empowered that their own inner guidance system (their heart) drives the solution to this mess.