CrossFit athletes talk about their shift from aesthetic to performance goals and how they learned to be happy with the results.

In June 2016, a group of athletes ran hill sprints as part of Reebok CrossFit One Training Grounds, an invite-only camp for CrossFit Games qualifiers.

It was hot that day. At the top of the hill, after the sprints were done, seven of the women posed for a photo. Six of them had their shirts off. Ben Bergeron, one of the coaches in attendance, took the photo and posted the picture on Instagram.

Jamie Hagiya, a first-time Games qualifier, saw the photo, and instead of looking with pride at her place among an elite group of athletes, she only noticed one thing: her stomach.

“I’m standing next to Jen Smith, and Katrin (Davidsdottir) is in the photo, and Christy Adkins, and all these women and their abs are crazy,” Hagiya said.

“‘I look disgusting,’” the Games athlete said to herself.

“This is ridiculous that I’m comparing myself to these girls,” Hagiya said she thought next. “It doesn’t mean that I don’t work hard.”

A few days later Hagiya took to Instagram herself:

“My body does not look like all the other @crossfitgames female athletes with crazy ripped abs and zero body fat on their stomachs. I wish I could look like that, but I’ve come to the realization that this is my body. ... But the bottom line is I need to eat to perform. I can’t worry about trying to look like a (Games) athlete because having a six pack doesn’t always make for the best athlete.”

Many people join a CrossFit gym hoping to make aesthetic changes but then discover it’s much more interesting to learn how to do a muscle-up or increase squat numbers. However, this newfound focus on performance rarely means athletes completely abandon aesthetics.

We all care about how we look, and our feelings about our appearance can vary depending on the day, our mood, and the Instagram post. 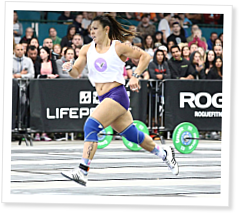 Jackie and Justin Roth use fitness and healthy eating to improve quality of life and reduce disease symptoms, but the discipline and community they found at Mountain Loop CrossFit changed… Continue Reading

Top athletes talk about their single-minded pursuit of the podium and how they filled the void when they stepped back from the sport they love.

Most of us define ourselves… Continue Reading