It has long been said that necessity is the mother of invention and this month we give support to that adage with two exceedingly simple inventions. Both devices address problems that have long plagued our training efforts.

The first problem in dire need of remedy was how do we bring the pull-up to people who've never done one? Our first and easiest solution was the use of an assisted pull-up device like our favorite, the Stairmaster Gravitron, and we have long made regular use of the Gravitron with all our pull-up initiates.

There are several aspects of the Gravitron, though, that make its use problematic. First, the Gravitron is outrageously expensive. At nearly $3,000 after shipping, few pieces of gym equipment come even close in price. The steep price is perhaps particularly foreboding to someone relatively new to serious strength and conditioning training as are most people working to develop their first pull-up. Imagine if your first weight set had to be an Eleiko; there'd be a lot fewer weightlifters!

The second major problem with the Gravitron and all other assisted pull-up devices is that they are about as portable as your kitchen refrigerator. 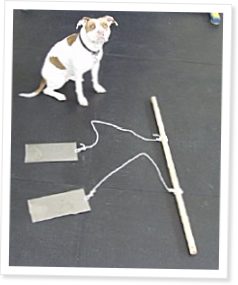 Parallettes training is fun and highly developmental. Without… Continue Reading

Three years after first exploring the topic, Coach Greg Glassman revisits the garage gym concept to report on the successes that have met hundreds of CrossFit start-up gyms. He also… Continue Reading

Sandbag training has been around as long as there has been manual labor. Even in our industrial age, luggage, duffels, and those huge bags of dog food, concrete, or… Continue Reading

I have never been able to do a pull up,...until crossfit. I could do 30 good push ups, and respectably in most other physical things but that darn pull up was always a source of embarrassment.

It took 8 months but because of what I read on crossfit, I knew it would happen I just had to keep trying and using the thera bands. That was the key for me, knowing that it would eventually happen, as long as I kept trying. Now I can do 2! Thanks.

Love the ideas! And by using therabands to a stationary anchor on the heel-lift-detector, I can make that work when I'm working by myself.

Thanks for a great idea!

Some other caveats for pull ups with therabands when trying to avoid getting smacked in the eye: DON'T look down at your feet; DON'T wear your slick-soled Chuck Taylors, DO wear some shoes with tread that can "grip" the band.

I'm an optometrist, and I violated the above rules with the result of one pair of shattered eyeglasses and a juicy left eye whack. But hey, eye patches are sexy!

On the other hand, I went from having zero pull ups all my life to six strict ones in about two months.