What Is CrossFit? by Greg Glassman - CrossFit Journal

In this seminal article, "What Is CrossFit?" Coach Greg Glassman explains exactly what a strength and conditioning system built on constantly varied, functional movements executed at high intensity looks like. Examples and data outline how the program, after years of clinical application, is forging elite fitness.

We utilize movements most representative of those found in nature. Functional movements are defined articulately in the article. They use universal motor recruitment patterns. They incorporate core to extremity movement patterns, and they move the body or other objects effectively and efficiently. They are also “compound” (multi joint) movements, which cannot be reduced. In other words, no amount of bicep curling will lead to a pull up.

On the potency of functional exercises we say, “The magic is in the movements,” but our line on maximally effective programming is, “The art is in the mixing.”

The fitness that CrossFit advocates and develops is broad, general, and inclusive. Our specialty is not specializing. Combat, survival, many sports, and life reward this kind of fitness and, on average, punish the specialist.

Neuroendocrine response is responsible for a great deal of the program's efficacy. Several of our functional exercises like the deadlift, clean, and squat to name three, have been shown to alter hormone and neurotransmitter production.

Our protocol has been developed experientially or empirically. We call it the black-box model. We don’t know or care so much about what goes on inside, we’re keeping our eye on inputs and outputs, workouts and results alone. This approach has kept us a generation or two ahead of theory-based programming. 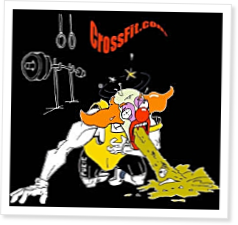