Getting off the Crack by Nicole Carroll - CrossFit Journal

Nicole Carroll writes of her struggles with implementing the Zone Diet in, “Getting Off The Crack.” At first Nicole thought she was starving and wouldn’t survive. But she went on to thrive on the Zone Diet after four tough weeks and came away with a new perspective.

Do the diet! Do the math to find your block prescription then weigh and measure your food for at least two weeks, she said. That said, at ten blocks per day, I found the first three weeks of the Zone to be some of the hardest days of my life!

After just two days I told the Glassmans I was starving. They told me, “You’re not hungry. It’s just a craving for the insulin response.” I argued, “No. I really am hungry! my stomach is grumbling twenty minutes after eating. I think I need more food… DON’T TELL ME I’M NOT HUNGRY!” To which Greg responded, “Eat two blocks of low-glycemic veggies at your meals and then tell me you’re honestly hungry.” I tried it and It helped. Broccoli became a truly beautiful thing in my life.

By Day 21, I was eating five times the fat allotted in the standard Zone prescription, up from the original 15 grams to 75 grams per day. Once I made that change, it got much easier because the benefits came quickly.

Four weeks into the Zone diet, I was stronger and faster than I had ever been. I had lost fat and gained muscle. My benchmark workout times decreased, and my pull-up numbers increased. Furthermore, I was happier and more emotionally balanced. I woke up feeling good. 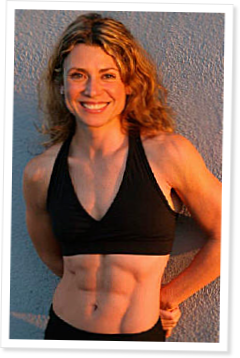 There are 29 comments on this article. Login to add your own.

In his cooking series, Denver’s Nick Massie prepares meals showing how to apply the CrossFit dietary prescription of meat and vegetables, nuts and seeds, some fruit, little… Continue Reading

29 Comments on “Getting off the Crack”

It was this article, and that picture, that got me committed to the Kool Aid. Nicole, you are a huge inspiration. And, just as you said I would, I got the same results that you described in your article. Thank you for cracking the code for me. CrossFit and The Zone are the Rosetta Stone of fitness and beauty.

Hey Nicole, I train with Kat Finnerty at San Francisco's Krav Maga school. I gotta say you're an inspiration! I've checked out several movies from the website and have adopted "Nasty Girls" as my personal work out 1st song to get me going! My arms are getting cut, I'm getting strong and then I started feeling self conscious about being "bigger than the guys," especially since I'm, what, barely 5'? Anyway, after seeing you and how great you look and how strong you are, I take pride in the results of my hard work! Rock ON, girl!

Nicole, you look awesome!!! You are the living brathing definition of beauty. Keep up the good work.

Wow you look great! A pur inspiration to me! I'm new to all this.How do you get started with crosBlockers? Whats that? As I mentioned already all new to this.Can you point me in the right direction? I would greatly appreciate any directions.Thanks for your time:)

Fantastic abs Nicole. Which exercises do you recommend? How often do you train them and what reps work best for you?

Who is the author of Zone diet. I love your abs and have been trying to eat right but sometimes it's hard. I would love to have abs like that.

I love your abs too.
And your back squat.

You are great Nicole... Never seen any women with a greater leg strength.

Fitness has always been my passion. I studied Kinesiology at UGA and now physical therapy in graduate school. I'm A.C.E certified as a personal trainer, but you and the others at Crossfit had me curious. I recently adopted the CrossFit training methods and I am now in the best shape of my life. You are an amazing athlete. Thanks!

What's Nayonaise? Is that a brand name, typo, or something homemade?

Also, with The Zone's recommended fat servings, obviously the liquid fats, such as olive oil, are measured in terms of level teaspoons, because you can't have a heaped spoonful of liquid. Am I therefore to assume that when using avocado one would also use level spoonfuls?

Never tried The Zone before, but have been reading about it on here and it makes sense. And the testimonials and associated pictures are VERY motivational.

Stuart,
Nayonaise is a brand name for a soy based spread that is similar to mayonnaise. About the avocado, one of the great things about combining the Zone with CrossFit is that you don't need to micromanage your fat that precisely. If you dial in your carbs and protein, the difference between heaping and flat teaspoons on your avocado is irrelevant to your success.

we don't have Nayonaise down here in Australia, so thanks for clearing that up, and for clearing up the fat issue. Based on this article and "Meal Plans" (I think that was the one), I was under the impression that extra fat was beneficial, but it's good to get some clarification.

Stuart,
Extra fat is beneficial when you are very lean. If you're not very lean, it's not necessary.

Nicole, I realize its been a while since you published this article but I read something today on the MSN Website that reminded me of your comments I had read in the article about "Getting off the Crack"

WEDNESDAY, Dec. 10 (HealthDay News) -- Science is verifying what many overeaters have suspected for a long time: sugar can be addictive.

In fact, the sweetener seems to prompt the same chemical changes in the brain seen in people who abuse drugs such as cocaine and heroin.

The findings were to be presented Wednesday at the American College of Neuropsychopharmacology's annual meeting, in Nashville.

I'm relatively new to the site and am in the phase of learning the lifts before I start the WOD's Despite being a fairly fit 50, I have been able to drop 8 pounds since adopting zone diet principles and cutting out the sweets.

Thanks for your article, its nice to know the medical community is catching up with the advice.

very inspirational article, i started the zone 3 weeks ago and i am still trying to find the best combos and what works best for me. my problem is that i am still starving after each meal, i have so many questions and i post on the boards but i hardly get responses. im keeping at it though

Very inspiring article. After reading it I'm going to give the Zone a try for a month. I am going to purhcase the book today but have a quick question for anyone who may be able to give me some advise. Although I Cross Fit train durning the week, I also like to go for a very hard 2hr road bike ride on the weekend. Maybe it will explain it to me when I read the book but becasue I will be expending up to 1,500 calories from my ride alone should I add more Blocks to my day as it's not a normal day?

Great article Nicole. I'm a relative newcomer to Crossfit and am trying to get into the Zone diet, but you're right: I'm hooked on carbs! I didn't realise until I tried the Zone how much my body craves the sugar rush of simple carbohydrates.

You have inspired (possibly guilt-tripped!) me into perservering with it!

Keep up the good work.

I think I would rather feel hungry after a zone meal! I am supposed to be eating 5 block meals (at 5'6", 181 pounds) that make me so full I want to puke. I've considered several times that I should change my diet structure from 19 blocks that every calculator and calculation put me at to at least 17 blocks (which still is guestimated to be 5, 5, 1, 5, 1). I've been pretty tempted to go down to at least 16 blocks for a 4, 4, 2, 4, 2 because my stomach is still not used to eating a big 5 block meal even after 2 months. I've lost some weight and fat, but I upped my after-WOD strength training to daily 5X5s of one of the major lifts each workout day, JUST TO SUPPORT eating this much freaking food. I guess I envy lean people who start doing this diet!

Hey Adam, Two hints from my experience. #1 when you calculated your blocks did you do it based on your LEAN body mass. I am 5'8" and started at 175# but I had 15% body fat so that my lean bodymass was only 145#. Then multiplying that by .7 activity factor got me to 14.5 blocks per day or three 4 block meals, plus two 1 block snacks. Then #2 I recommend mixing up your glycemic index carbs: i.e. not only veggies, too much food! but not only fruit too much insulin spike. You can find the right balance! Also look at Rob Wolf's site and get his 21 ways to skin the zone from performance menu.com. Good luck!

I've just started the Zone Diet and chewing a lot of gum seems to help tremendously.

I think I echo a lot of people who commented on this article that it is inspiring. I started a strictly Zone diet today and feel the hunger between meals... but I also feel the lack of mental fuzz or physical weakness that usual hunger used to carry. I'm sticking with it!

Classic article. We still reference it constantly during nutrition lectures.

nice insights into the zone diet! i know its different for everyone, but in order for me to feel full & satisfied, I need to have a lot of fat in my meals. i cant believe you started out on 15 g per day! glad you got over the fat-phobia and decided to up the fats.

I thought I'd just throw this in here, but, is everyone aware that the human body is only capable of utilizing a max of 35 grams of protein. At least that's what I think Dr. Sears said. This is a really great article by the way.

A max of 35 grams in one sitting is what I meant in the last comment. I think the body resets itself chemically every 3-5 hours...