This article was originally written specifically about the role of perception in alpine skiing. It was written by my father, George Twardokens ("Dr. T.," as he is known), and was published in the journal Professional Ski Instructors of America. We wanted to bring some new concepts and prescriptions to the CrossFit community to get "black boxed" and refined. This article uses some of the words of my father’s article verbatim and removes most of the skiing specifics to discuss the importance of perception in training for all types of athletes, as well as soldiers, police, firefighters and others who depend on their physical readiness.

Athletes looking to improve their skills often concentrate on how they move, but they'd be wise to focus also on which movements they select and how quickly they respond. Training to reduce response time through enhanced perception—as if by instinct—can make for better performance on demand.

Perception is a topic that's generating wide general interest these days. In his bestselling book Blink: The Power of Thinking Without Thinking, Malcolm Gladwell examines what happens inside a person’s brain during the nanosecond between when it receives stimuli and then prompts decisions and actions the person isn’t even aware of. Gladwell scrutinizes the way the brain absorbs information immediately and then generates responses that we often consider to be intuition but that, in reality, are part of a complicated process of neural actions and reactions. 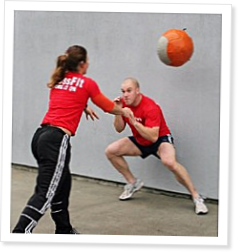 Well I guess I will be the first in this comment section to say this article is awesome. I am going to use this technique for shooting and cqb training when I get the chance next. Not sure how to implement it yet but I will come up with something. Stop/go training will obviously come in handy in a combat zone. It is so simple. Oh yeah I use to ski race a long time ago and Eva T. is awesome!

On the topic of making decisions quickly in space, check out reaction balls. They are irregularly shaped bouncy balls that bounce in 'random' directions. Very tricky things!