The health lift, known more commonly as the deadlift, is the most basic of essential movements. If an athlete were to do little more than deadlift they would most certainly stay very functional and possesses good strength. I view the deadlift as a sign of vitality and independence. The simple task of squatting to the deck and picking up an implement represents baseline functionality. When someone can no longer squat and pick up their belongings, their independence is gone.

Deadlifting is traditionally executed straight on; facing the bar/dumbbell/dog food/landscape mulch, but deadlifting an object at the side is a different and equally useful skill. It can involve just about any object with a handle. Those living in rural areas or raised on a farm are accustomed to picking up their stuff and moving by foot to the destination. 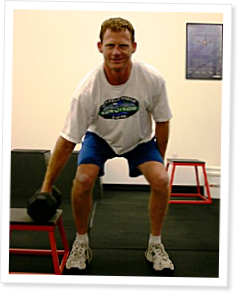 When assessing the most functional of upper body movements, it is tough to argue against the efficacy of vertical pressing movements (a.k.a. overhead pressing). Those individuals… Continue Reading

In last month's dumbbell article, we explored the effects of different loading positions for the bilateral squat. As I mentioned there, squats are a must for anyone seeking… Continue Reading

While standing in a grocery store line the other day, I picked up one of the popular mainstream men's fitness publications. (I confess.) They are all the same. The models are… Continue Reading