By the end of 2004, it was clear that there was a growing demand for CrossFit certification seminars. In early 2005, they were three-day events that began to include specialists like Coach Mike Burgener. This video is from the first day of the Santa Cruz cert that ran from Friday, April 15 to Sunday, April 17, 2005.

Coach Glassman describes the role and importance of squatting in life and fitness, along with the salient features of a good squat. Lani Lau is the Demogirl (an official seminar term that applies to men also). Those familiar with the current format of the Level 1 seminars will see the origins of the current three movement lectures and small group training. 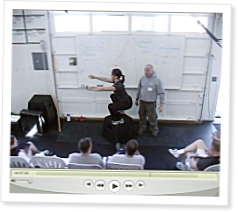 In this two part lecture, Coach Greg Glassman unifies fitness and health. This lecture is the first time we’ve published a revolutionary new component (a three-dimensional model) that has… Continue Reading

I remember that seminar - the rings line is one of the greatest he ever laid down.

Great video! I particularly like the point about getting up off the ground. It's intuitive that the thighs have to be below parallel to stand up, but I never thought about it from a teaching perspective. By coincidence, I had someone ask me about squatting today - I actually used this analogy, and watched the light bulb turn on instantly. Glassman never disappoints!

And here I was thinking that I was the only guy that did a muscle up to get off the toilet...

This video is gold!
I know personal trainers and Physicians that would benefit greatly from just a little of Coach’s wisdom and teaching method.

That was my first exposure to CrossFit, I had no idea what was to come. A few minutes later we were circled up for Tabata squats with Annie leading my group. Messed me up bad, by the end of those three days I felt like I'd never walk right again.

I forgot I was the demo guy for the stiff-legged get up!
The B-2-B squats just about killed me when I tried to keep up a +20 rep with Lani; round 7 was a zero score for me. Phat Helen put on serious hurt as well.

These videos never disappoint. The discussion of the heels up and not engaging the posterior chain is priceless. Every video has tons of little nuggets of information that just sink in immediately. Thanks crossfit and coach.